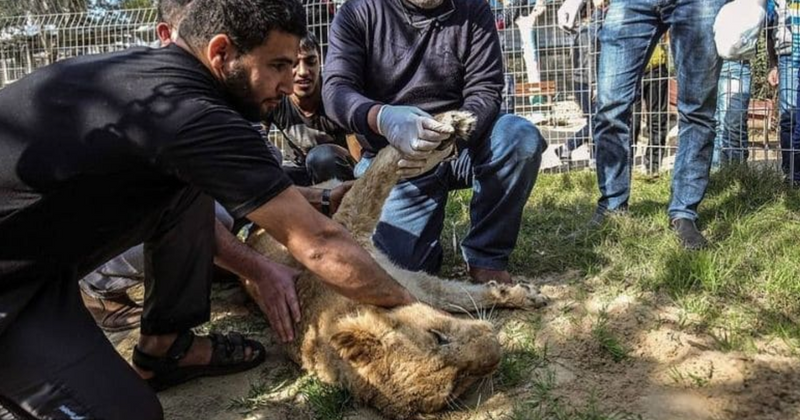 Can you imagine living in captivity, where all your decisions, what to eat, when to sleep, and who to be with, are controlled by others? Can you imagine the life of an animal confined in the zoo?

Unfortunately, experience has shown that people can go to great lengths just to gain profit, and animals are often their victims. Humans can be extremely inhumane, I’m afraid.

In an attempt to boost business, a Palestinian zoo declawed a 14-month-old lioness to attract visitors to come to the place to play and interact with her. The incident happened in the Rafah zoo, as there are no proper veterinary facilities in the war-torn Gaza strip.

The zoo faced problems in terms of the number of visitors, and its owner believed that this act would result in more traffic. He partly succeeded in his intention, but the effects were outrage and disbelief.

The horrible harm on the then-14-month-old animal, named Falestine, was done in February. The animal was tranquilized and shrouded before being hoisted onto a table, so veterinarian Fayez al-Haddad could swiftly get to work.

He clipped off her claws, one by one, with a pair of shears, before sewing her up.

Several days later, Haddad subjected her to additional torture so he could complete the job.

The act hasn’t morally affected the owner of the zoo, Mohammed Jumaa, 53, and Haddad. Yet, you do not need much imagination to understand the horrors the animal experienced.

The Four Paws charity claims the horrible deed can be compared to chopping off a person’s fingers up to their knuckles. It explained:

“For big cats, removing the claws is a particularly vicious procedure which causes long-lasting damage. Natural behavior, such as grabbing food or climbing, is hardly possible without an animal’s claws. Since the amputation was not done in a proper vet clinic, the chance of infection is high.”

The Rafah Zoo opened two decades ago and is located close to the border of Egypt in the southernmost part of the Gaza strip. The zoo closed in 2004 when an Israeli army bulldozing operation destroyed it.

Two years ago, Jumaa re-established it and opened it for business.

According to Four Paws, the conditions at the zoo are monstrous.

Four newborn lion cubs were carelessly left to freeze to death, while over 49 others are trapped in pitiful enclosures. The zoo, in its pitiful enclosures, now has 49 animals including five lions, a hyena, cats, monkeys, wolves, emus, dogs, and exotic birds.

The charity also maintains that animals are regularly smuggled to and from Gaza via underground tunnels that lead to the zoo.

They demanded that it be shut down due to the inhumane practice of confining animals to tiny, unkempt cages.

Only time will tell what will become of the unfortunate lioness. Advocates of animal welfare were outraged to find out about the incident, and many will perhaps intervene.

The act of declawing the lioness is not at all horrifying for Jumma, who stated that he is trying ” to reduce the aggression of the lioness so it can be friendly with visitors.”

Unfortunately, this is not an isolated incident and may soon be followed by more, so if left unaddressed, this unconventional animal care practice might result in dreadful consequences.

Four Paws, in an Instagram post, stated that it was fighting for the closure of the zoo, “where over 40 more animals are kept in horrible conditions.” The charity added:

“Our team already started negotiations with the relevant authorities. They urgently need our help! We’ll keep you updated about this case!”

What most people thought of when learning about this horrible and savage act was that the removal of the claws of the animal was a completely unnecessary thing to do, as there’s no need for people to ‘play’ with animals which should be out in the wild.

Yet, Haddad said he has watched Falestine’s behavior closely when, on February 12, they took the lioness out of the cage and forced her to be near visitors at the zoo, including children.

“The claws were cut so that they would not grow fast and visitors and children could play with her. We want to bring smiles and happiness to children while increasing the number of visitors to the park, which suffers from high expenses.”

He added that she does not lose its innate nature, and will not give up her offensive instincts. He stated that the sheared off claws typically grow back in 6 months.

When she was released from the cage, even though she was in great pain, the lioness played with zookeepers. Yet, they plan to let some more time pass before allowing her to interact with visitors.

⚠SHOCKING footage revealed: young lioness brutally mutilated ❗ The owner of the oldest zoo in Gaza allows visitors to play with this lioness and therefore cruelly removed her claws with garden shears! Sadly, this is not the only animal suffering in the Rafah Zoo; just a couple of weeks ago 4 newborn lion cubs died due to the unusually cold weather and lack of proper care. We strongly demand the closure of the zoo, where over 40 more animals are kept in horrible conditions. Our team already started negotiations with the relevant authorities. They urgently need our help! 🆘 We’ll keep you updated about this case! #SaveGazaAnimals . . . #FOURPAWS #VIERPFOTEN #animals #animal #animalwelfare #bigcats #lions #lion #cruel #animalcruelty #cat #rescue #animalrescue #help #sos #animalsanctuary #thelionking #helpforlions #helpforanimals #animalwelfareorganisation #animalcontent #gaza #palestina #urgent #suffering #horrible #donate #savegazaanimals