141 Southbound Improvements- What Took So Long?

The Only Thing Slower Than Traffic Is Government

141 Southbound Improvements. What Took So Long? Resolving real traffic issues isn’t glamorous. And it certainly is not the pursuit of something as tangible as the pursuit of Gateway Markers, is it?  Despite that fact, I have discussed and discussed the intersection of 141 at State Bridge Road with both Elected Officials AND Staff for more than 4 years now.  What took so long? 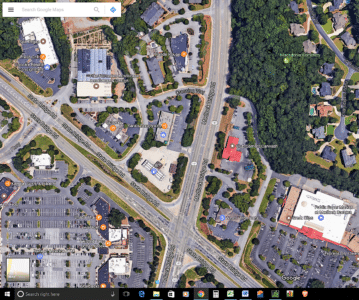 The small concrete island in the corner cost residents thousands of wasted hours stuck in traffic.

As a member of the JCCA meeting at Egg Harbor Café once a month, we saw the backups to Wilson Road from State Bridge Road. Over and over I repeated what could be done to address that issue… The COJC had the desire to pursue Michigan Thru-U Turns for the intersection, but could not pursue taking the underutilized right turn lane and making it a shared through lane.

As a long-time resident of Medlock Bridge, I have more than enough experience of leaving during evening rush hour, only to take ten or more minutes just to cross State Bridge Road, even at 6:30 pm or later.

Having met with three current and one previous council members (Gray, Bradberry, Coughlin, and Endres) at the intersection to discuss what could be done, common sense prevailed and the third lane is now a shared lane through southbound. This is a Major Traffic improvement for Johns Creek. If only all four had been on the Council at the same time. Then we could have addressed this year ago saving residents thousands of hours of daily frustrations.

The Improvement Should Be Obvious

Here is a video of how that now works during the evening rush hour (5:00 pm April 24th).  And unlike the Gateway Markers, the results were quick, tangible, and clearly have provided a positive return on investment.

I have stated on more than one occasion that the majority of this Council is more concerned about optics than outcomes.  They’ll debate endlessly on issues of little value to the overall community while ignoring those that provide clear and tangible benefits to the residents.  It is we that must hold them accountable for they have proven that they cannot hold themselves accountable.

There are plenty of other improvements that can be made to 141-State Bridge Road that will get the traffic moving quickly and efficiently. WITHOUT the implementation of very expensive solutions that will merely frustrate the residents or resort to six-lane roads next to our neighborhoods.

141 Southbound Improvements – Should It Have Taken This Long?

Clearly, the answer is no.  But it did.  141 Southbound Improvements. Why did it take so long?