The Super-Structure is expected to have a pole as wide as 54 inches to hold up the approximate 20,000 pounds.  It is to be positioned parallel to the high transmissions lines along Medlock Bridge Rd.

It will be in view of homes in St Ives Country Club and upscale restaurants nearby such as Stoney River, Trattoria 141 & Viande Rouge. Even the rooftop restaurant of Twisted Taco will have a non-stop view of the GIANT Screen projecting commercial ads 24/7.

Many of you may recall GDOT Denying the application in July. They measured from the corner of the parcel. The Billboard company appealed, and requested the measurements be made from the remaining headstones. 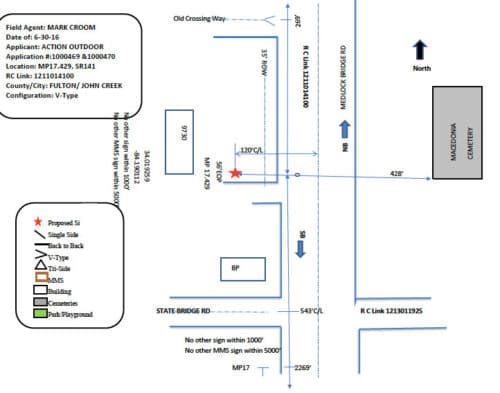 The cemetery has a storied past, with neglect and desecration for many years.

Pamela Baughman, GDOT employee delineated the cemetery to the northeast corner of the parcel. Here is GDOT’s justification for approving the application, measuring 545 feet. State Law is 500 feet. 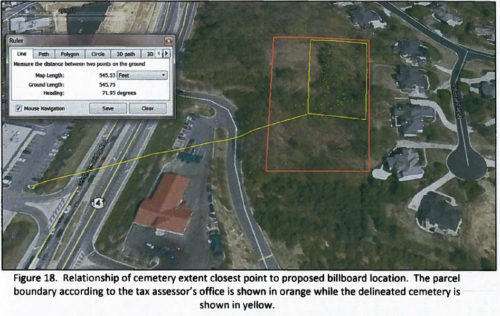 The owner is in the dry cleaner, next to fairway package store.

All I know is that it is a gumba of the Mayor who owns the BB company!!! Mayor your days are numbered!

time to get your clothes cleaned somewhere else…he doesn’t seem to care about your town, why should we care about his business

I am boycotting every single company that will appear on that and other J Creek billboards. That is worse that shoving it down our throats. As for the mayor – he should be ashamed for betraying our dreams. That is NOT what we envisioned when we were fighting for this city

I have personally talked with the Fairway strip owners and told them I would never do business again at the dry cleaners or the package store. I had a similar talk with the folks at Take 5 Oil Change (near State Bridge and Jones Bridge). This Take 5 often has a sidewalk sign twirler out front trying to attract business.

Please remember, the Take 5 billboard installation also involved the butchering of trees across Jones Bridge at the QuikTrip. The billboard companies have the right to pursue the cutting or butchering of any trees or foliage they deem as obstructing visibility to their signs!!

Beyond legal redress, avoiding businesses that erect these signs is an easy means to protest. Yes, it’s not really fair to tenants who don’t own the property but what about these billboards has been fair so far? Is this GDOT decision fair?

Looking at Google maps, the access road behind the car wash appears to curve around the property line of the cemetery, never coming closer than about 50′. If this curvature was done intentionally to satisfy building codes, why doesn’t the billboard company need to adhere to a specific distance from the cemetery property line and not the closest remaining headstone? Maybe our elected officials should insist that GDOT survey the cemetery with ground penetrating radar (as discussed here http://www.georgiashpo.org/historic/cemeteries) to determine if unmarked graves exist closer than the closest remaining headstone.

Not only will this billboard cause more distraction at an already extremely busy intersection, but it will provide continuous light for all of the homes within several blocks. And to what end? Has any billboard advertisement pressed you into purchasing a product you don’t want or need? Where is the data that proves its true advertising worthiness? I have to believe that it is all about the monthly revenues that will be paid to the city for this atrocity to be erected. Is there a plan for who will pay to take it down if it doesn’t produce the desired results?

Can You Trust The Johns Creek...