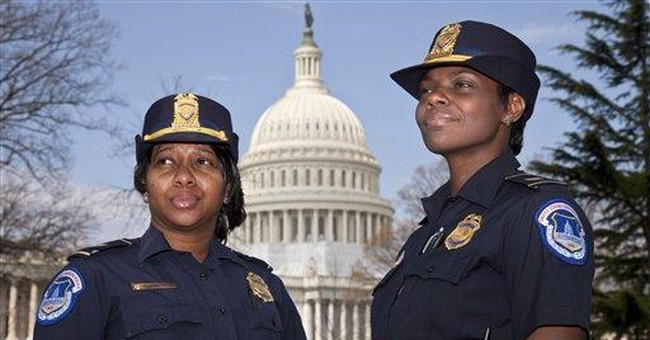 I wrote earlier wondering what happened to Joe Biden’s State of the Union address?

When it’s your first year, it’s actually called just an “address to a joint session of Congress.” But most normal people still call it the State of the Union.

But as people are beginning to press the question about Biden’s speech and raise questions about the continued National Guard presence and military posture in D.C., a new rationale just got dropped from the person who is now the acting head of the Capitol Police, Acting Chief Yognanda Pittman.

“We know that members of the militia groups that were present on Jan. 6 have stated their desires that they want to blow up the Capitol and kill as many members as possible with a direct nexus to the State of the Union,” Pittman revealed during testimony before a House Appropriations subcommittee.

“Based on that information, we think that it’s prudent that Capitol Police maintain its enhanced and robust security posture until we address those vulnerabilities,” she said.

Sounds like the Chief has been watching a little bit too much “Designated Survivor.” This is literally the plot from the show, where the Capitol is blown up, trying to take out as many members as they can, except for the person who is left, the ‘designated survivor.’ ‘Designated Survivor’ is now trending on Twitter because people see a little bit of coincidence between the description from Pittman and the show.

Second, the timing of this ‘threat’ is a bit interesting, with people wondering why the Guard is still there, the fencing is still up and Biden isn’t giving his speech. The last we heard from Homeland Security there was no clear threat from anyone. Now, I’m not saying that couldn’t have changed since they said that, but if I were the Republicans, I would want the specific intel to which Pittman is referring and to know that there was something more than just random mouthing off on social media. I’m also wondering why if this were true, that Psaki didn’t say it yesterday when she was asked about why Biden wasn’t giving his speech. You can bet if they had that information they would have put it out there.

So, this buys Biden more time until they end up canceling it altogether saying that it’s in the interests of “safety” or have a “virtual SOTU” where they can have Biden use a teleprompter. And keep the military posture as long as they can.

Pittman claimed, “We have no intention of keeping the National Guard soldiers or that fencing any longer than what is actually needed.”

Somehow, that’s not reassuring me.

Freedom Rings In Savannah Despite Local...