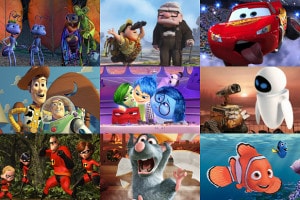 23. “Cars 2” (2011)
“They should let people see the movie for free,” one pundit opined, “since Disney will make all their money back on the bedsheets.” Some of Pixar’s best movies are sequels, but this follow-up to an already inferior studio entry seemed like nothing but a craven bid for more merchandising money. The results were good for shareholders but middling for moviegoers.

22. “Cars” (2006)
Never underestimate little boys and their love for automobiles. This brightly colored but dramatically flat tale is most enjoyed by a) male moviegoers who b) saw it before they turned 10 and c) have no idea that it tells virtually the same story as the Michael J. Fox comedy “Doc Hollywood.”

21. “Cars 3” (2017)
It’s a movie about middle age and the fear of obsolescence — you know, for kids! While Lightning (Owen Wilson) tries to soup himself up to take on young, faster rival Jackson Storm (Armie Hammer), the veteran racer mentors Cruz (Cristela Alonzo), a trainer who gave up her racing dreams. It’s visually sumptuous and has a few good ideas, but the “Cars” series remains Pixar’s blandest.

20. “A Bug’s Life” (1998)
Back in 1998, the second Pixar feature was racing to the big screen against the thematically similar “Antz.” Neither has achieved iconic status, notwithstanding the “Bug’s”-themed kiddie area of Disneyland. The film does provide memorable voice roles for “The Ref” co-stars Denis Leary (as a manly-man ladybug) and Kevin Spacey (scaring the little ones as an ant-exploiting grasshopper).

19. “Monsters, Inc.” (2001)
The things that go bump in the night are just doing their jobs, collecting the screams of boys and girls to power their monstrous alternate dimension. Leave it to Pixar to turn childhood terror into something fuzzy and huggable while also sneaking in a metaphor about over-reliance on fossil fuels.

18. “Onward” (2020)
Pixar sticks the landing with another memorable you-WILL-cry ending, but most of the movie that leads up to that denouement doesn’t really merit that level of investment. Two elvish brothers have 24 hours to find a stone to bring their dead dad momentarily back to life, and while the gags and the action are fun, the character-building and world-building are both a little sketchy.