Another Johns Creek Billboard is erected near Abbotts Bridge Rd & Medlock Bridge Road. There has been much propaganda from the City regarding the billboards. The point person for that propaganda was the City's Communication Director, Jeff Breslau. He was recently released from prison for his role in the Fat Leonard scandal.

According to Preserve Johns Creek:

This latest billboard is the legacy of poor negotiations, and potentially some conflicts of interest that occurred during those negotiations. While the courts mandated that Johns Creek was required to allow a certain number of billboards that were originally denied prior to our city’s formation, there was no requirement to allow them to feature all of the latest technologies. Had our negotiators stood their ground and only allowed static (i.e., “old fashioned”) billboards, it’s very likely that none would have ever been built in Johns Creek.

If you are wondering, what is that potential conflicts of interest? PJC is referring to the relationship of the lead negotiator, on behalf of the City. Councilwoman Cori Davenport and Jack Hartrampf, Co-Owner & Negotiator, representing the Billboard Companies. Cori is a close family friend of Hartrampf and apparently was a bridesmaid at his wedding. Mayor Bodker tapped Cori because of this relationship, he thought it would benefit the City.

Below is a picture of Councilwoman Cori Davenport & John Hartrampf. This was 3 months after the Johns Creek Billboard settlement was signed. They are at the Billy Joel concert at Philips Arena. 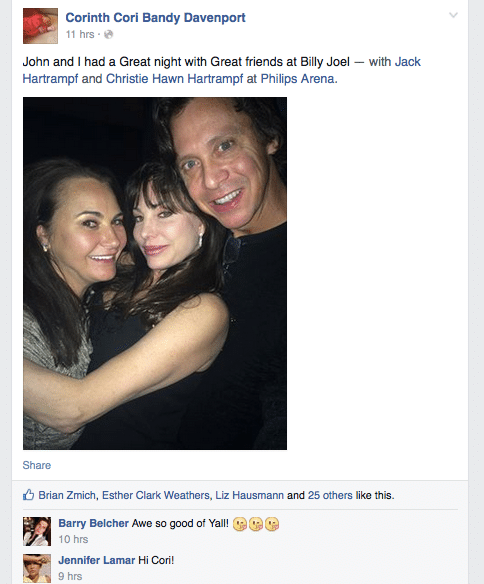 Cori & Jack both have Lakehouses next to each other on Lake Lanier. They have been neighbors for years. 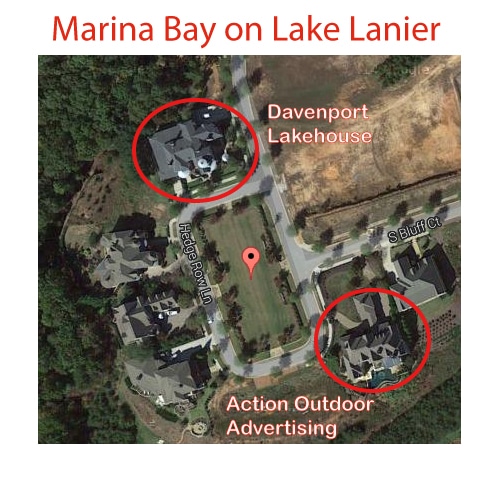 Ethics complaints were filed against Councilwoman Cori Davenport and Mayor Bodker over the Billboard negotiations. Cori Davenport retained top attorney Stefan Passantino and they were swiftly dismissed by a Hearing Officer.

“All complaints filed hereunder shall be heard before a Hearing Officer who: (i) shall be a competent attorney at law of good standing in his or her profession, (ii) shall have at least five (5) years’ experience in the practice of law, and (iii) shall not maintain an office within a ten (10) mile radius of the City of Johns Creek, Georgia.” Code of Ethics

Furthermore, the Hearing Officer’s office is in close proximity to the City Attorney’s office. Was there no other attorney in Georgia available to give an impartial investigation? Interestingly, Mr. Passantino later went on to represent President Trump for compliance and ethics from January 2017 till August 2018.
Cori Davenport subsequently did not run for re-election in 2017. It was disclosed during a town hall that Mayor Bodker was consulting for Cori Davenport's husband's company. Councilwoman Cori Davenport and Mayor Mike Bodker both saw no conflict of interest and defended the relationship.
Source: City of Johns Creek, Facebook & Hall County Property Records
SHARE