On June 20th, 2016, Councilman Steve Broadbent made the motion to approve the apartment complex that is currently under construction on Medlock Bridge Rd and Bell Rd.

It came before the council under the guise of a lawsuit, and there was no legal notice for the zoning hearing. Councilman Jay Lin described himself as "Very close to the Real Estate industry". He seconded the motion.

Broadbent cited concerns on spending potentially $100K for litigation fees in court for the case. (Ironically, in the very same meeting Broadbent gave an update on his pet project the 'Strategic Economic Development Plan' (SEDP) which has cost the City well over $100K on just 2 consultants...)

During the Zoning Hearing, Community Development Director Sharon Ebert described the development distinctly and how it will have a "2 level structured parking garage which will include 225 parking spaces in addition to 50 surfaces or on-site parking to a total 275 parking spaces". Mrs. Ebert also stated there will be a 2200 square ft restaurant & 300 square ft yoga studio, both open to the public.

City Council voted 5-2 to approve these specific plans below, along with adopting this Ordinance document.

*Not on the Current Council

Below are the building permit plans approved by the Community Development Director.

This is COMPLETELY DIFFERENT from what City Council Approved.

Where the original plan was more natural space and landscaping, the current plan submitted for Permitting, is nearly all paved.

The Parking Garage has disappeared.

A double lane, perimeter road, now circles the entire facility. Parking spots engulf every available area. Will active Seniors be able to back-in & out of these tiny spots everyday?

We've highlighted in Pink what appears to be ~47 parking spots in the Setbacks.

Below is from the City of Johns Creek Zoning Code of Ordinance: 18.3.1.

No off-street parking shall be permitted within the required setback for the front yard and the side corner yard.

We've highlighted in Yellow what appears to be ~87 parking spots are missing Landscaped Islands.

Below is from the City of Johns Creek, Zoning Code of Ordinance: 4.23.3.

What about the south side of the parcel?  The majority of the 32 parking spots in the setback (in pink). The developer did not request a variance for near the storage facility. Why was parking ordinance not adhered too? This is particularly concerning with such significant storm water issues in the City.

The company that sued the City, Norsouth Development is not the Company who filed the permits to develop the property, Sojourn Johns Creek Venture Partners. Sojourn's managing members are Richard Aaronson and David Dixon. David Dixon registered the LLC, and we found Richard Aaronson's name buried in attached deeds to the property.

As soon as the permits were issued on 11/10/17, Sojourn Johns Creek Venture Partners sold the parcel to another LLC managed by Richard Aaronson and David Dixon, to Bell Road Venture Partners LLC.

With this transaction as the 'current owner', Aaronson's name is listed on this LLC publicly and his Atlantic Realty Partners is now currently preparing the apartment complex for marketing for rental for prospective tenants. It is expected to open this Spring 2019. 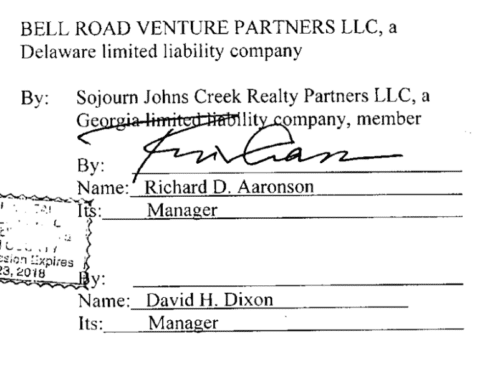 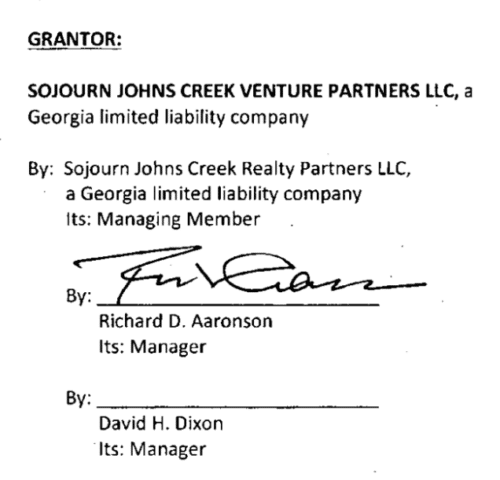 Developer was embroiled in investigation with Mayor Bodker

If there is 1 person responsible in Johns Creek for the amount of high-density development in this area, we can all look toward Richard Aaronson. He has developed the entire western side of Medlock Bridge Rd, from Abbotts Bridge up to the Standard Club. He was even the applicant for the HUD apartment complex (Hearthside) across the way, that Mayor Bodker, and Norsouth Development toted as an accomplishment during this rezoning hearing.

In 2013 City Council launched an investigation on Mayor Bodker for possible ethics violations, including receiving reduced rent ($300 per month) at Johns Creek Walk as well as free use of a vacation home owned by Aaronson. Subsequently, Mayor Bodker voted favorably to rezone Johns Creek Walk II, which included that HUD apartment complex (Hearthside) we noted above.

Accepting a gratuity and then voting on a rezoning involving property owned by Aaronson is a violation of the city’s ethics code. In addition, Mayor Bodker allegedly violated the City Charter through abuse of powers by directing staff to issue occupancy permits for Johns Creek Walk, after the city denied the permits.  The ethics investigation was canceled after the election by the swing votes of Lenny Zaprowski and Cori Davenport upon their immediate swearing into office. 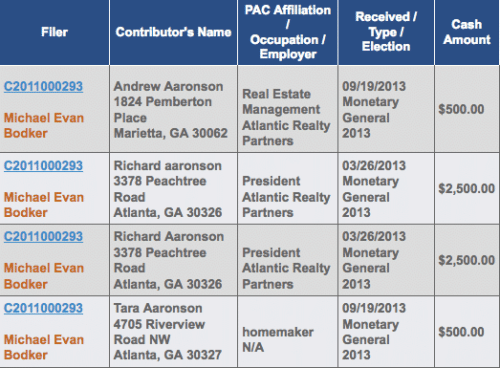 Other Established Relationships on Council

Councilman Steve Broadbent is on the Fulton County Development Authority. It was only a few months (3/2016) prior to this vote he saw Richard Aaronson regarding a Letter of Inducement for the issuance of an astounding $50,000,000 in taxable revenue bonds. This wasn't the first time either ($84,000,000 taxable bond in 2014)...

Mr. Aaronson himself came to the meeting and discussed the community input. In contrast, that is something Johns Creek has lacked from him, with all of his development activities here...

Below is a snippet from the Fulton County Development Authority meeting minutes.

Mr. Aaronson informed the Authority that community input has been a major factor in the configuration and design of this project so that it will not “overshadow” the adjacent historic single-family neighborhood. Mr. Nash recommended approval of the project. Upon a motion made by Dr. Jolley, which was seconded by Mr. Broadbent and Dr. Maupin, the Authority unanimously approved the letter of inducement for Grant Park Venture.
Click here for the full PDF document...

Where are the traffic improvements that were promised for Bell Rd & 141 intersections? They were to be implemented before the development, which is now slated to open in Spring 2019. Empty promises on congestion relief?

Why did the City Staff feel so compelled to approve permits for plans that are so different from what the City Council approved?

Was saving the developer an estimated $4million dollars from constructing a parking garage, a consideration for City Staff, when approving these permits?

Finally, was the City zoning ordinances overlooked, when issuing the Permits?

When did Mayor Bodker realize his longtime friend Richard Aaronson was involved in this apartment complex development?

Had Richard Aaronson been an applicant, would Mayor Bodker recuse himself?

In conclusion, did Mayor Bodker violate the City Charter through abuse of powers by directing staff to issue these permits?