The Bell Rd/141 Apartment Developer is Suing the City, over the denial received back in December. There is currently a settlement agreement to be voted on by Council, this Monday, June 20th, 2016, 7 pm.

Though the terms and specifics of the development are not disclosed, below is the public notice placed on Bell Rd briefly, before being removed. The Sign on Medlock Bridge Rd is obstructed by the rail-guard. City Staff is responsible for the sign placements.

No information provided to the Citizens, is this Back-Dooring the Apartment Complex into the City?

The developer is currently seeking 140 Apartments and would like to cut into the landscaping strips to squeeze the Apartment Complex into the small area of land. 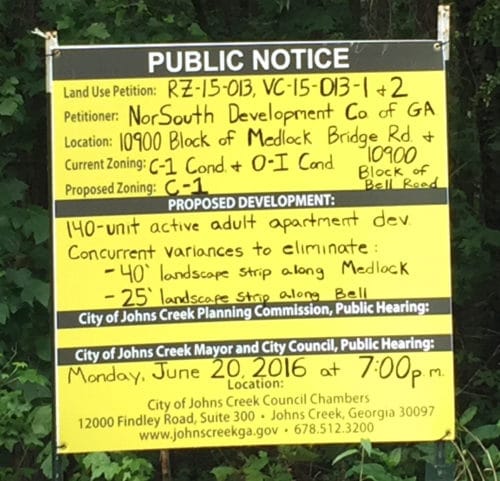 This new trend happening at City Hall is disturbing, and the residents are the Losers in these scenarios. After years of opening zoning (we will write about that in a future post) Developers sue the City for a better deal.

We spoke to an Alpharetta Councilman about the issue, and he said they do not have this problem of frivolous cases in their City. If someone sues Alpharetta, they will Vigorously fight it out in Court, thus developers are very cautious to litigate. Also in recent years, Milton has successfully fought in court and denied as a council, rezoning for apartments.

It appears this Developer wants to settle because they will lose the lawsuit in court. If they could get a better deal in court (10 story apartment building?!) they would not seek to settle.

Frankly, this development should go through the proper process in place, with full disclosure to the Citizens, and reapply a year from their application date. Or better yet, develop according to the Land Use Plan, and not try to change it!

This is the location of the proposed funeral home a few years ago, which the Landowner withdrew the rezoning application on his own accord.

Interestingly, the Landowner for the Bell Rd Apartments also owns the corner of Abbotts Bridge Rd and Medlock Bridge Rd. Key land for any future road improvements such as the proposed ThrU turns or some other concept. Will this land be included with the Apartments approval?

Most importantly, we have not seen any intersection improvements to date, despite more and more homes (1k+) added down the road.

With so little time or information provided to the Residents, let City Council know your thoughts. electedofficials@johnscreekga.gov

Shocker. The Mayor loves apartments and rezoning the comprehensive plan for them.

Why else would so many crop up since he’s been Mayor…
He wants Johns Creek to be an urban dense city. Do we?

Traffic is terrible over there. How could this even be seriously considered??

Hideous leadership. We are way too crowded already! I swear to God people are going to revolt soon.

The more I see of this government the more I wonder if we made a good choice in voting for”Johns Creek”?

In voting for our current mayor, seems to be the problem.

The proposed density at this corner is too extreme. This much massing in no way fits in with surrounding. It also sets the stage for likewise projects on similar small corners in the future. The counsel should in good conscience deny the request.

Unfortunately, it appears Johns Creek has been infected with the same affliction as Washington DC, professional politicians who are focused on their pockets rather than the welfare of the citizens. Sad.

Ditto
Our voice will heared thru next ballot box

I am so disappointed that even more apartments are being built in our area.

I am really disappointed with our city staff. They are not forthcoming about this apartment development and don’t do the job they are suppose to in informing us. Do they work for the developers or the citizens?

Oh wait they busy planning toilets in the woods of shakerag.

Donald Trump said something during the debates that strikes me here. He said that he never settles lawsuits bc then you get a reputation as a settler. Rolling over will weaken our future zoning integrity. And any exceptions made in this case will make a precedent that other applicants can point to. If the council thought it was right to deny these apartments before, then they should stick to their guns.

Our City Slogan is “Be the Exception”.

Got a piece of property that doesn’t work for what you desire? Zoning standards standing in your way?

Just ask us and we will let you “Be the Exception”.

Who cares if others followed the standards as set forth by our laws. We will let you “Be the Exception”.

All you have to do is ask.

Todd Burkhalter paid back developer Jeffrey Wages for his $750 campaign contribution by speaking on behalf of the Bell Road and 141 Apartments at Monday night’s, June 20, 2016 JC City Council meeting. Thank you Todd!

PERMANENT BAN ON NEW APARTMENTS
As traffic continues to worsen, we must find solutions that can be implemented by the City Council. We don’t need additional high-priced consultants to “study” our traffic to know that we cannot continue down the same path and expect our traffic to improve. Todd proposes a permanent ban on all the future low-end apartment complexes that already fill our community.

Burkhalter stated, “The impact of bringing more high-density, low-income apartment complexes would be devastating to this community.” He continued, “It’s time we actually do something to prevent this rather than continued talk with no action. Let’s enact a permanent ban that cannot be easily overturned by future council members and resolve this issue!”

Placing a permanent ban on new apartment communities will not only improve traffic, it will also reduce crime, and prevent our first responders from being overloaded. Additionally, it will force current apartment companies to improve and renovate as complexes become dated and rundown. This prevents apartment owners from simply moving down the street to build new developments, leaving the old to become low-end and unsightly developments.