Residents are calling on Mayor Bodker to resign immediately.

In light of the vile and disturbing content, we won’t publish the bodycam videotape of Mayor Bodker’s arrest, as other news outlets have. We can assure you the bloodcurdling screams in the ‘alleged’ domestic violence is UNACCEPTABLE.

Above all, who feels so unsafe and compelled to videotape interactions on a Sunday morning?

Residents have seen numerous council meetings video recorded where Bodker’s anger has surfaced. It is not difficult to imagine what happens when there are no cameras.

Mayor Bodker is requesting Privacy for himself and his family over this matter. Become a PRIVATE CITIZEN then.

Bodker is innocent until proven guilty in a court of law.

Until that day in court happens, a cloud of mistrust and negativity circles.

Such a Tangled Web

Many ethical questions are raised with Bodker in a position of power and involved in the court system.

Finally, we can only wonder what legacy this will leave for Johns Creek? This is in addition to his two costly investigations into his unethical behavior. Residents would be remiss to forget the 420 ft Supertower, giant LED billboards, favorable zoning decisions for developer friends, significant stormwater issues, TSPLOST, etc. 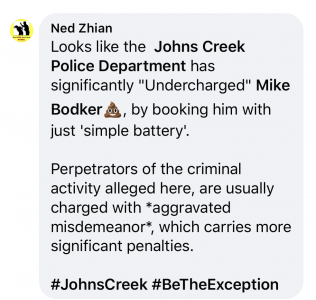 Michael Bodker replied on the Johns Creek Facebook page, calling Ned a dog, and his day is coming.

Additionally, from the Dias, Mayor Bodker once stated he wanted to crucify an unknown resident. The person was making unsavory and salacious FB comments, to which Bodker wanted to nail them to the wall.

Because of the alleged behavior, it has diminished Bodker’s ability to instill confidence in the public. As an Elected Official, he is a Representative of the City and designated Spokesperson. However, with Bodker arrested by City Staff, and pending court proceedings, issues are compounding. It has jeopardized the ability of City employees to focus on their job and feel comfortable in their work environment with Bodker responsible for oversight and leadership. Thus residents are urging Mayor Bodker to resign, to focus on his personal matter.

Tom Corrigan stated, “The time to eliminate this drama from the City of Johns Creek government, the residents and let this issue attempt to become more of a private issue for the family to work out.”

Lastly, what do you think readers, should Bodker Resign, or remain in power?

Wow! Bodker admits he’s is GUILTY on the bodycam to the police officer.

Yet, he blames the victim for bringing it on. Classic abusive narcissist.

Listening to screams of the child sounds like she is neglected and there is no concern for her well being. Was he undercharged? Valid question!

What does this guy hope achieve by staying on as mayor? An increase in integrity and respect from residents for clinging to power?

It’s not like he was good at making policies that improved Johns Creek. It’s gone downhill with him in charge. Traffic, apartments and billboards… most seem to come for the schools (which he has nothing to do with) and quickly leave as soon as they graduate.

There are six other council members on this council. While Bodker may not want to resign, don’t you have an obligation to do what’s best for the City of Johns Creek?

Or are you good doing what is best for Bodker?

With so many problems all surrounding this Mayor in the past, he has forfeited his benefit of the doubt.

Don’t be part of the problem Council Members. Be part of the solution. Ask Bodker to resign for the good of the City.

Thanks for shining more light on this issue JCP. This article provides further confirmation that our Mayor is a shameless thug…

When are they going to let inmates that are “at risk” with this virus!?! Johns Creek has my co worker in a city jail.. He has severe asthma. Last week deny of his inhaler for a few days… And last night, Saturday night, deny inhaler AGAIN!! He sounded horrible on the phone he is at risk, already sick! He needs to be home where he is safe and healthy! Not in those conditions, which are the reasons this man cant breath! He also has 4 young children and elderly parents in the Atlanta area!! There are a TON of things I could say about this jail but im not going to. Not today. My concern is my co worker that needs nursed back to health because of the poor conditions in that jail and neglect of the staff thinking they know his needs better than him who has lived this way for 36 years!! These inmates there have NOT been given hand sanitizer and extra personal soap and they have not been given extra access to their commissary! Can somebody, anybody, anywhere help D or educate me so i can help D and others like him!!
Please help!
Thank You for your time

Heather – We inquired with the City Manager and below is his prompt response:
The City of Johns Creek does not operate a City Jail. Our arrestees are taken to Fulton County Jail or if they are wanted out of another jurisdiction they are transported to that Jail. You will need to contact whatever facility the person is in to inquire about potential releases and conditions.

I just wanted to come back here to say Thank You to a lady named Jennifer (at least I think thats who the email is from that responded) so far she has been the only person to get back to me and Ive posted a lot of things in a lot of places.. I know everyone is in a panic and life is hectic! I just dont want to hear that my co-worker passed away from this virus in that dirty jail and that he never got to kiss his babies on the forehead for 1 last time! I mean this man works 7 days a week to pay child support and his paycheck is only $50 bucks a week! Many times ive seen him take his last $10 and get hot food and hot coffee for the homeless and hand it out! Again, thank you for your time! Good luck to all of you and your families! And stay healthy!
Heather