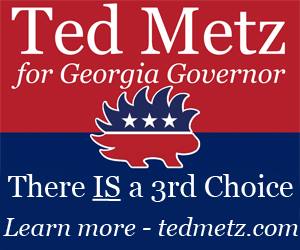 Georgia — Ted Metz, the Libertarian candidate in the Georgia governor’s race, officially kicks off his campaign this week.

“For years now candidates from the two establishment parties have given us nothing but empty promises and corruption,” Metz said.  “We cannot keep handing over the reins of government to the same people and expecting different results.  It is time for something new.”

Supporting a traditional libertarian, small-government platform, Metz has chosen the legalization of cannabis, criminal justice reform, and eliminating cronyism in state government as key issues for his campaign.  Therefore, he also is an adamant supporter of Second Amendment rights and fiscal responsibility.

“It is exciting to have this option in our gubernatorial election,” says campaign manager, Elizabeth Melton.  “Voters who feel that government has gone too far with its interference in our daily lives should consider Ted Metz to be the best choice. “

In addition, Mr. Metz will be “hitting the campaign trail” hard in the upcoming weeks, talking to people around the state about his ideas for the role of Georgia Governor.

As the September poster child for ” I am Johns Creek” I love receiving updates for what’s happening around me. Thank you so much for all your hard work keeping us informed.
Carole Madan
Momma nature
http://www.mommanature.com
Retired Master Naturalist/Master Gardener & former Landscaper
Poet/Writer