A Jury Trial is scheduled for Oct 5th, 2015 for a lawsuit filed against the City Council for denying a zoning application of a subdivision of 53 houses.

City council stated the land was viable for redevelopment with the upcoming ‘District’ Proposal. The City hired Urban Design Associates to design a commercial district & downtown. The area is approximately 800 acres, and the largest Land Stakeholder is Tech Park Atlanta. 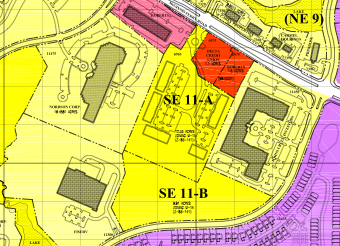 In August 2104, JC Flex LLC (Tech Park Atlanta, TPA) petitioned to amend the Zoning Map to allow for a Subdivision of 53 Houses in Tech Park.

–
Steve Broadbent, Lenny Zaprowski, Bob Gray, Cori Davenport & Mayor Mike Bodker voted to deny the application.
–
Former Council Members Stewart & Raffensperger voting in favor of the subdivision of 53 houses.
—
During the hearing, representatives stated they invested over $1.6 million to prepare the land (map SE 11-A, SE 11-B) for development & have extensively marketed it to no avail.–TPA pointed out the 2 Subdivisions across the street, Brookhaven & Easthaven (purple) and The Oaks Apartments nearby.
–
The City has spent at least $500k on the ‘District’ proposal, between consultants, and hiring an additional Assistant City Manager to manage the oversight of this redevelopment planning. The cost for the attorneys for this City Council Lawsuit is unknown at this point.
–
Image Source: Select Georgia

I’m confused. The main property owner in the area labeled the CBD is having to sue the City of Johns Creek to do what they desire with their own property?

Can someone tell me if the City has spoken to TPA about the City’s plans for Technology Park and what was said?

For some reason this article made me chuckle. Seeing the words “sued” and “JC Council” in the same sentence almost seems like some kind of Karma.

I am confused about what I reading here though. Does this mean Bodker and cronies went ahead with spending $500k of tax payer dollars on studies for this “District” pipe dream (that only they wanted) without even knowing the land owner (s) were ready and willing to sell their land for ‘urban development’?

Good. I am glad the City lost. Don’t want a District or Buckhead or Paris here. The Mayor should move there since that’s what he wants.

Let them build some houses, we are the SUBURBS!

Wasn’t “The District” voted down on an election ballot a few years ago? Why is the city council still pursuing it?

It was NOT voted down.
There was no vote.

Why is this 2 year old article and issue being re-hash. Move on people.

Because the lawsuit Judgement was issued recently.