In the past 2 years, Lynda Lee Smith, Chairwoman of the Johns Creek CVB (Johns Creek Convention & Visitors Bureau) has AGGRESSIVELY advocated and earmarked nearly $100K, possibly more, on art projects for Urban Catalyst Lab (UCL). All without any competitive bidding or seeking artists from Johns Creek… This includes the art tunnel & gateway markers.

Just pick one - no option for don't like any!

The current contentious project Gateway Markers was to be under "forced choice" voting.

CVB originally requested $40K for 2 designs, then $64K for 1 design. Mayor Bodker thought it was a good value and advocated for UCL.

The CVB is currently seeking another $55K second gateway markers for next year.

Corruption is the misuse of public power (by elected politician or appointed civil servant) for private gain.

Cronyism is the act of hiring someone because they are a friend. Both nepotism and cronyism are damaging not just to departments, but to entire workplaces. 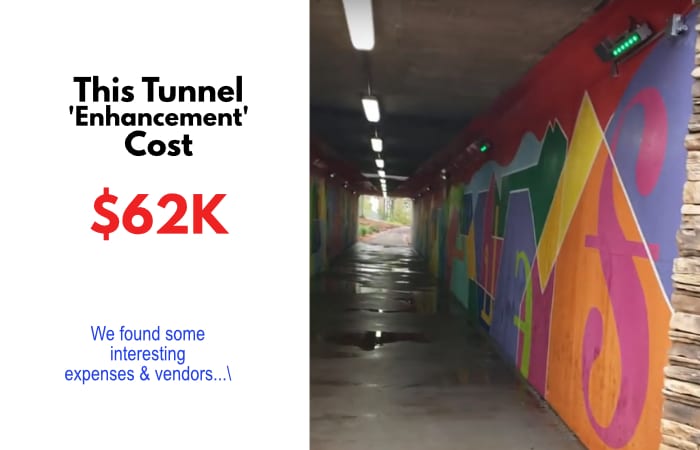 Johns Creek CVB spent a total of $62K on the art tunnel project. Kent Altom Johns Creek City Council Candidate’s employer, the Gilroy Firm, reviewed the UCL contract. Urban Catalyst Lab was paid $25,696 to paint the Tunnel under Medlock Bridge Rd. UCL hired an artist from New Delhi, India to paint large letters in the tunnel. Within the contract “The CVB will also provide two local artists as volunteers to assist the lead artist”. The volunteers, all UNPAID, were from Johns Creek.

If the purpose of the CVB is to “serve as an economic catalyst”. One would think, using Johns Creek businesses would be a top priority as vendors and for the contracts.

Where are the Johns Creek Businesses?

Well, except 2, both affiliated with the CVB Board. The Hyatt Place (Manager is a CVB Board Member) was paid $367 to accommodate the artist flown in from India. $32 was spent at Seven Sister Scones (director also on CVB Board).

If indeed these CVB dollars are meant to benefit the residents and businesses of Johns Creek, where are they? You would hope that electricians, photographers, food items, and other expenses would be sourced from Johns Creek where possible, and they did not.

Are the Johns Creek Business Taxes Too High?

Or are the businesses in Johns Creek so expensive that they cannot compete on price?  If so, then we need to continue to look at the business taxes. This includes eliminating the CVB hotel/motel tax, and other unnecessary tax burdens on small businesses.

Kent Altom Johns Creek Council Candidate has been aggressively campaigning against Chris Coughlin for Post 4. In addition, Kent Altom has received campaign donations from both Lynda Lee Smith and her husband.

Lastly, have you seen our video tour of the Art Tunnel?