Dogs Are Born With Ears And Tails. They Should Get To Keep Them. 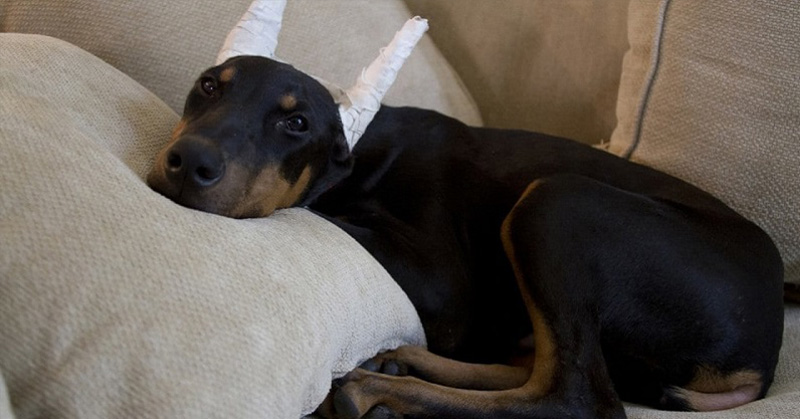 Dog people know that a canine companion in life is a true blessing. However, just like a parent would do, a dog owner should, in all cases, ensure the safety and wellbeing of the animal.

Therefore, never accept a thing just because “that’s how it’s always done.” If you consider getting a puppy soon, the following information is valuable for you to know.

In case you think that Dobermans and Miniature Schnauzers have naturally erected, pointed ears, and almost non-existent tails, we are sorry to tell you that this is not the case.

According to a recent study, 42% of Americans share your opinion.

However, study author Katelyn Mills believes that the lack of awareness of survey respondents may be somewhat intentional:

“People disconnect themselves from things if they find it uncomfortable. “They don’t want to know about it.”

After birth, these dogs undergo procedures known as ear-cropping and tail-docking. They are both considered unnecessary, but their primary purpose is cosmetic.

In the first one, the floppy part of the ear is cut off, and then kept taped to a hard surface for several weeks while they heal, to stay upright. It is performed when the dog is 6-12 weeks old and is performed under anesthesia.

When the dog is 2-5 days old, the tail is surgically removed using a pair of scissors, or a rubber band is wrapped around the tail to cut off the blood supply so that it will die and fall off on its own.

Many breeders and veterinarians claim that the puppy is not fully alert and it won’t remember the pain, even though in most cases, the procedure is performed with anesthesia.

Yet, both of these surgeries are inhumane and painful, judging by the repeated shrieking heard by puppies during and after the surgery. Also, after the procedure, the dog is at risk of infections and other complications, and many puppies suffer from long and chronic pain.

An intact tail protects them from injuries, and even they do get injured, the injuries are minor and heal fast.

Dogs use their tail to communicate, to show friendliness or desire to play, to demonstrate submission, or warn, so the surgery severely inhibits this ability and puts them at a social disadvantage.

According to a 2016 study, surgically altered dogs were, in general, perceived as more aggressive.

“What is scary to me about the cropping is that you’re essentially creating a very alert, forward-looking appearance, even if that is not how the dog is wanting to present itself.”

Additionally, she believes that the appearance makes them less likely to be adopted and get affection from dogs and people:

“In terms of how dogs are perceived by humans alone, I feel very bad for them. It’s nice to be perceived as friendly and approachable.”

New York and Vermont have considered banning the controversial practice, but the legislation was not put in place.

The American Kennel Club (AKC) maintains that the procedures are “integral to defining and preserving breed character” for some dogs, but the American Veterinary Medical Association (AVMA) and the Canadian Veterinary Medical Association (CVMA) disagree, with the latter stating that these procedures “are not medically indicated nor of benefit to the patient,” and “these procedures cause pain and distress, and, as with all surgical procedures, are accompanied by inherent risks of anesthesia, blood loss, and infection.”

Nevertheless, numerous potential dog owners don’t know that they have a choice, whether their dog will undergo these procedures or not. So think twice before you allow the breeder to ear crop or tail dock your dog and thus handicap it for life.

An even better alternative is to adopt an animal at the local shelter. Thousands of doggies are waiting for someone to offer them a permanent home and give them their entire love.