Florida Man, 74, Wrestles Alligator To Save His Puppy In Viral Video 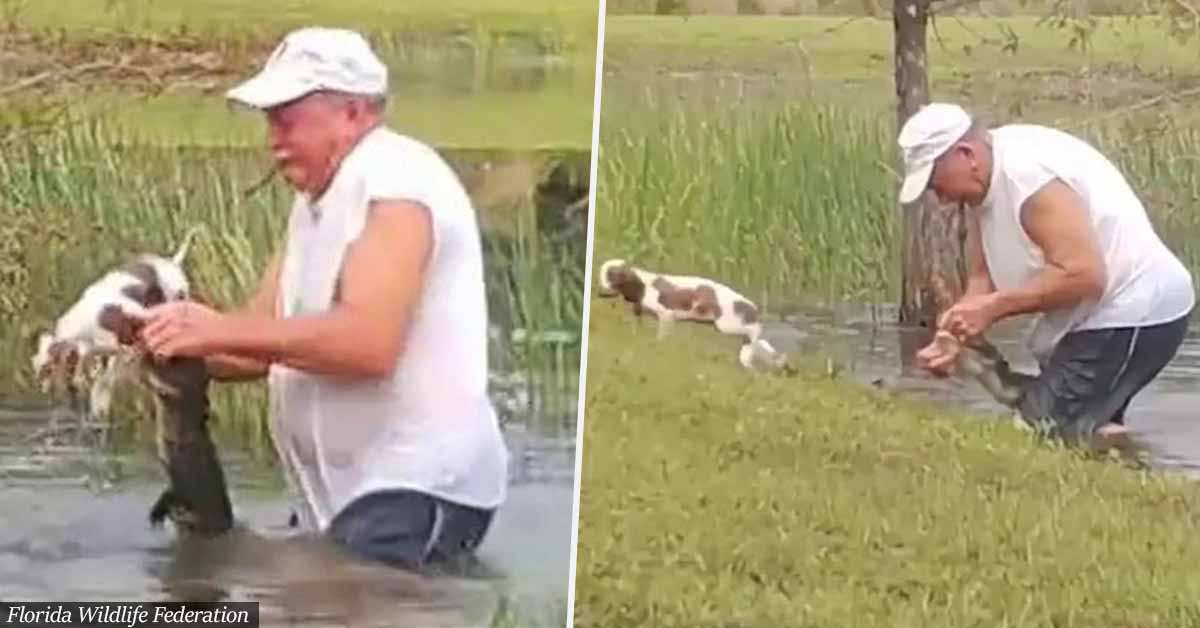 A brave 74-year-old dog owner jumped into a pond and saved his dog from an alligator.

Dog lovers know that canines are the most loyal and fun companions a person can have in life. Therefore, responsible and loving dog owners care for their pets in the best way possible- even if this means that they have to risk their comfort to save them!

A surveillance camera caught the shocking moment when such a man, the 74-year-old Robert Wilbanks, jumped into a pond to rescue his puppy from being eaten by an alligator!

Wilbanks was walking his 3-month-old puppy, Gunner, when, all of the sudden, an alligator jumped out of a pond nearby and grabbed it.

The retiree, led by his instincts, immediately jumped into the pond to save his Cavalier King Charles spaniel! The brave man wrestled with the small gator, and opened its jaws to set the puppy free!

The entire scene was filmed by a surveillance camera, and the video shows Wilbanks releasing Gunner, that escapes away while his owner holds the alligator’s jaws open.

“We were just out walking by the pond  and it came out of the water like a missile. I never thought an alligator could be that fast. It was so quick.”

Wilbanks revealed that catching and holding the alligator was not too difficult for him, but opening its jaw wide was “extremely hard”.

Remembering how he got the adrenaline rush and instinct to rescue his puppy, the man simply said that he sees his puppy as his child, “so there was no second thought whatsoever”.

Gunner suffered a puncture injury in his belly after this unpleasant event, but it was successfully treated by a vet. Additionally, Wilbanks noted that his hands had been “chewed up” and that he had to receive a tetanus shot.

Be that as it may, the retiree declares that he does not want the alligator to be dislocated from its habitat.

Wilbanks agreed, adding that he understands that the alligator reacted according to its nature to survive, and the pond is in fact its home.

He noted that he didn’t request for it to be removed from the pond, and added:

“They’re part of nature and part of our lives. We do need to be aware they are wild animals. They’re not here for our benefit. We’re very lucky to share this space with them.”

Nowadays, whenever he takes Gunner for a walk, Wilbanks keeps him on a leash, and 10 feet away from the pond.

Yet, he emphasized the importance of informing other pet owners about the danger, “ to make sure that they keep them away from the edge of the water”.

Gunner, you are one lucky dog to have Mr. Wilbanks by your side!