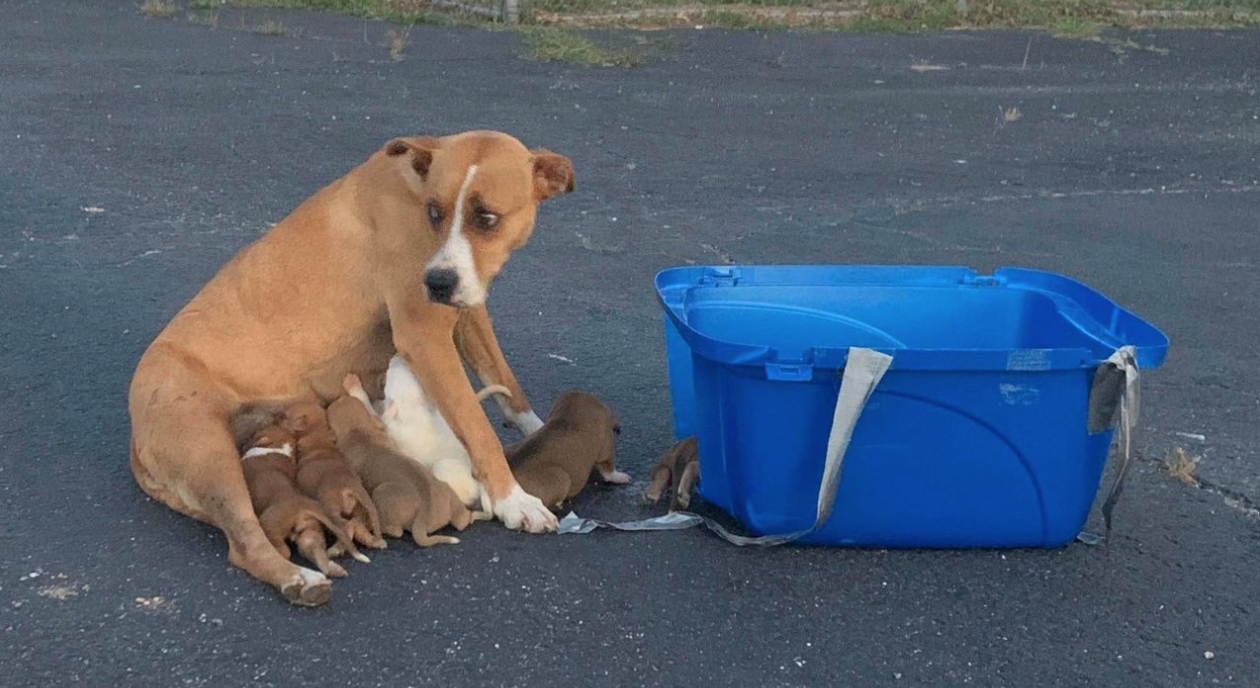 It amazes me the lengths that people will go to in ensuring the animal they are supposed to be caring for is discarded as if it were a piece of trash; it’s beyond my imagination.

When a 5-year-old Boxer mix dog was dumped in the parking lot of a church she wasn’t alone, she was dumped with her nine 2-week old puppies.

Not only did this poor pooch have to fend for herself but also her nine puppies who she had not long given birth to.

The heartless person behind this cruel act has not been found but thankfully the mama dog was found by two animal heroes who helped this sweet dog get back on her paws.

The frightened dog was found in a church parking lot in Abilene, Kansas. A picture was taken of her and posted on social media appealing for the public’s help.

Mistie Boerger of Paw Angel Animal Rescue saw the post and knew what she had to do.

“I saw the picture and it just broke my heart and I called Angel and we went and rescued the dogs,” Mistie said, as per the Animal Channel.

Mistie drove to the spot where the dogs had been found and put them in the back seat of her car.

“I just don’t know how someone could do that, leaving momma and two-week old babies,” Mistie said.

The mom needed medical attention and one of her puppies had to be put down after the veterinarian discovered a tumor in its throat.

After they received the medical attention they needed Mistie decided to temporarily foster them until they had fully recovered.

“They will be staying with me for two weeks and then moved to a permanent foster. They will be placed for adoption after they have been spayed and neutered and mom is spayed,” she wrote on Facebook.

Staff calculated that it would cost $2,500 to look after the dogs until they would be ready to go to a new home.

A Facebook post said the dogs’ food and the supplies needed are now covered but more donations are always needed in case medical complications arise, as is common with rescue animals.

It’s disturbing to know that a person would rather abandon a dog and her puppies without any access to food and water and exposed to all kinds of dangers, rather than taking them to a shelter where they at least have a fighting chance.

Thank goodness these dogs were rescued by these amazing animal heroes. Please share to thank them all.

Woman Wakes Up To Find A...

Woman Leaves Back Door Open During...