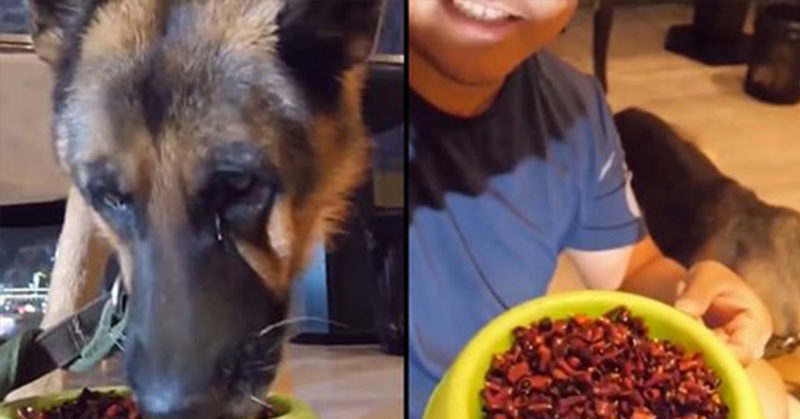 The owner of a German Shepherd filmed the moment he gave his pet spicy food, while tears stream from the dog’s eyes.

What most of us would certainly agree on is that if one has decided to own a pet, the animal has to be treated with lots of love and care. Our pets are not our marionettes, toys, or any sort of objects for fun. They are living beings that need to be treated with respect.

Therefore, animal abuse and violence, in any guise, must not be tolerated. Netizens are horrified by a new viral trend in China that involves cruel treatment of dogs, by giving them excessive amounts of food, including harmful items against their will.

The poor canines are given giant bowls of meat, snacks, candy, and peppers. One particularly disgusting video shows a German Shepherd being fed a bowl of spicy chili while tears stream from his eyes.

The dog is given what looked like a Chongqing chili chicken, or La Zi Ji, a regional dish known for its extremely spicy flavors.

Spicy foods are very dangerous for dogs, and while the smell was probably the main culprit for his eyes watering, it is unlikely that the dog felt the hot flavor, but it might have seriously damaged the digestive system.

On the video, the owner of the dog wrote:

“He is enjoying it very much.”

Overfeeding the dogs can be extremely harmful to the pets.

Worryingly, the video is part of a harmful viral trend that opposed the new campaign launched by the Chinese government.

This campaign attempts to reduce food waste as a way to mitigate food shortages due to the pandemic and damage to the food crops caused by floods. This put an end to ordering additional dishes from restaurants, and things like Mukbang content.

According to President Xi Jinping, the amount of food that goes to waste in the country is ‘shocking and distressing’, so he advised people to order one plate less than the number of diners when eating out — dubbed the ‘N-1’ system.

“Waste is shameful and thriftiness is honorable. Who knows that of our meal in the dish, every grain comes after hard toil? We should still maintain a sense of crisis about food security. The impact of this year’s Covid-19 pandemic has sounded the alarm.”

The campaign criticized mukbangers, social media influencers who eat too much food for their audience on a live-stream, and many Chinese platforms started to blur these videos to discourage viewers.

“Users have started removing their eating videos manually. But even then, they risk still being shamed online as their previous videos could be saved by others.

Social-media users have leaped on the opportunity to start naming and shaming those who were once part of the niche that has overnight been rebranded as ‘wasteful’ and ‘vulgar.’”

Yet, numerous Chinese citizens dislike the ban, and as a sign of protest, social media influencers started something which might be called ‘A doggy Mukbang”, and they over-feed their dogs to generate exposure online.

Netizens are outraged to view these videos, claiming they are cruel and evil.

Since the harsh criticism that followed the posting of the video with the German Shepherd, the owner deleted the video and later claimed that he knows chilies are not healthy for dogs, but his pet ‘really enjoyed eating it’.

Let’s just hope that this sickening trend comes to an end as soon as possible.

These Are the Best Dog Breeds...

A Guide to Caring for the...

The Best Small Farm Animals to...