With all the decisions happening at City Hall, it is no wonder that many residents go to City Council meetings with the intent to speak out about issues concerning them.

More recently, many residents from the Shakerag area have been speaking out about the plans for a Mega Sports Complex on rural Bell Rd.

Concerns over traffic, congestion, lack of proper infrastructure to handle the thousands of cars per day, environmental sensitivities with the river proximity, noise, and lighting pollution (attendees, whistles and field lighting), and financial concerns with the build-out costs, and yearly & long term maintenance costs & sub-police station, got more folks speaking out in City Meetings.

A steady stream of residents was questioning the judgment and motives of the leadership, over an array of issues.

Councilman Lenny Zaprowski voted in favor of limiting the public comment. Although he previously stated he won’t deny residents the right to public comment, he changed his position to align with Mayor Bodker, coincidentally after the Shakerag residents spoke out about the Mega-Sports Complex, a project he’d been a big proponent of.

So how do our Sister Cities handle public comment?

Both Alpharetta and Milton have open public comments for as many residents that show up for the meetings.

In addition, they have public comment prior to voting on individual agenda items. For example, if they are voting on spending $500k on widgets, or adopting a new logo, they will listen to the resident’s feedback before voting.

Also of interest, both Cities have Term Limits for their elected officials, which is another thing Mayor Bodker refuses to do in Johns Creek. 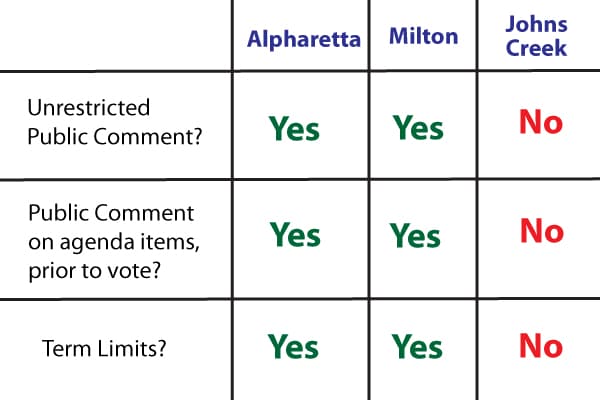 What else would you expect from Zaprowski, a Billlboard Bodker/Davenport lackey!

P.S. Seems that Doc Zaprowski is allergic to the truth.
Wayne C. is still awaiting a reply for an honest question(why he voted FOR BILLBOARDS in JC?) deleted by the Zapster on his campaign FB page.

Not exactly a fair and balanced report. I will be contacting the candidates directly to know their positions instead of reading this biased reporting. How do you report 6 childrens much needed sports fields as a mega sports complex? In addition, citizens were not limited on their right to speak. The first public comment is limited to 30 minutes but council clearly stated there would be additional time granted if if there was a pressing topic. In addition there is unlimited comment at the end of the meeting.

The plans were much grander than you imagine. Please read the following post, for a better understanding of the proposed mega sports complex, that encompassed 13 sports fields, among other amenities, such as trails, dog park, playground, activity center & more. The plans were so over the top, it required a police sub station!
https://www.johnscreekpost.com/take-cauley-creek-park-design-plan-back-drawing-board/

As far as your comment that the council would grant additional time for public comments, then why did they council bother passing a resolution for the 30-minute time limit?

It is gracious of the council to allow unlimited public comment AFTER they have voted on agenda items and laws that affect the residents.

As someone who was involved in the Cauley Creek Park issue, the development was way out of character for the Shakerag Character Area, would have created a traffic nightmare for those using the park, as well as those who live in that area, and did not take into consideration the noise and light pollution to the adjacent residential properties. Sixteen fields were originally proposed. I’m glad the planning has gone back to the drawing board, with the purchase of the additional Quail Hollow property, and I look forward to the opportunity to give input on the future of that park space.

Comments at the end of the meeting; are after the crucial votes are cast. Don’t you think that the representatives of Johns Creek who represent ALL of us should hear us on these topics BEFORE voting?

Were these plans ever presented to City Council? Or were they merely one of the many concept plans?

Subsequently, the City purchased a large adjoining parcel of property, which has now triggered a complete re-do of the Cauley Creek Park plan, including additional public input. Since this is the largest parkland in the entire City, everyone (nearby neighborhoods and potential citizens who would use these facilities) need to provide their input on how this best serves the interest of the entire City of Johns Creek.

Some comments will get flagged as spam and we even won’t see them.
Other comments won’t get published because of flagrant lies, slanderous statements etc.

Regarding “term limits” Johns Creek does NOT have them. There are no restrictions on how long an elected official can serve.

Here is an official definition:
Term limits are restrictions on how long a particular person can serve in a political office.

Why Are Term Limits​ Imposed?
Term limits are imposed so that one person cannot hold an office for life and so a variety of people can serve.

I won’t be voting for any candidates that oppose the sports complex for our children. The quality of life for Johns Creek families with young athletes is terrible and an embarrassment.

There will be people who will not vote for any candidate that supports it, just like there are people that will never vote for any school taxes because they don’t believe in public education or whatever…

Johns Creek Mayor BODKER , THIS IS WHAT IS WRONG WITH OUR COUNTRY WE NEED TERM LIMITS !!! JUST LOOK TO THE CONGRESS AND SENATE. Your term is up and you need to go . Johns creek need term limits for all our officials