Warren Hutmacher has separated from the City of Johns Creek as City Manager. We did a FOIA for his pay and separation agreement. Below is Warren Hutmacher’s Compensation, Bonuses & Car Allowance Benefits till June 21, 2019.

Here is the Separation Agreement for the former Johns Creek City Manager. Warren Hutmacher received 30-day notice with the agreement separation dated as of July 11th, 2019. and then 6 months of pay and benefits.  He will receive $110,809.16 over the next 6 months.

This is twice the average of the recommended compensation for City Managers according to the actual contract provided by ICMA, the International City/County Management Association.

Mr. Hutmacher has spent tax dollars with ease over the past 5 years. Even though he came from nearby Dunwoody, he was allocated a “Housing Stipend” of $6900. He also procured a custom Macbook for $3,618.00, out of the General Fund budget.

The largest tax increases in the City of Johns Creek were shuttled through during his management. It is important to note, with both TSPLOST & Park Bond, residents have been paying the taxes and have seen little results.

It is surprising Warren Hutmacher has lasted this long as the Johns Creek City Manager. We wrote in 2015, how he continually scanned into City Hall mid-day and how he spent his time. He hired expensive consultants from out of the City. 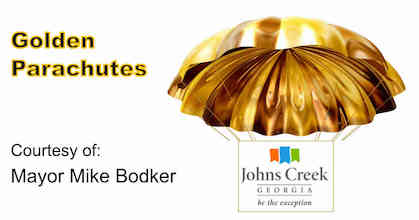 In April 2014, Mayor Mike Bodker interviewed and praised Hutmacher.  Lenny Zaprowski is the only other remaining one on Council who hired Hutmacher. Bodker would also be the point person crafting the City Manager’s contract and signing off on the Golden Parachute Separation Agreement.

So who do you call in an emergency? The Police. The Police Chief has been appointed as acting City Manager until a new hire.

It is also important to note, that as Mayor, Bodker is responsible for every document and check that runs through the City. Ignorance or lack of information cannot be an excuse.

Wow..our JC Gov’t is like the wild wild west..with our mayor as the gunslinger. Thanks for this reporting.

I’m switching back and forth between nausea and anger!!! Is there any way to impeach Bodker on this misuse of taxpayer’s money?

I feel more well-informed but I don’t feel well. There’s a gut reaction in my stomach that says we’ve been punched. Momma nature

It would be helpful to know why he was terminated.

The reason for Warren Hutmacher “separation” will not be disclosed by either him or the City.
Review section 5. Confidentiality, of his agreement. https://www.johnscreekpost.com/wp-content/uploads/2019/06/Separation-Agreement-and-General-Release_W.-Hutmacher-6-17-19.pdf

I’m curious as to whether Mr. Hutmacher has already received an employment offer from any person or any other entity.

According to Linkedin, he is a Principal with Clark Patterson Lee. CPL had lucrative contracts with the City of Johns Creek providing design services for the new City Hall & Park Bond. Both projects under Warren Hutmacher’s management were over budget and under-delivered.