Here are the Johns Creek Election Results & surrounding areas. A Blue wave of voters sweeps the City. In what has been a traditionally red, with Republican stronghold. Johns Creek has seen a drastic change since Cityhood 12 years ago. This was evident tonight, November 6th, 2018.

Many longtime residents will note the sharp increase in densities from the “Pro-Development” Republican leadership, for the change in demographics. Furthermore, couple this with the heated division on the national political stage created a blue wave of voters, who are either new to the area or haven’t actively voted.

The tightest race was between Kelly Stewart & Angelika Krausche for State Representative, District 50. A recount is anticipated as the difference is 260 votes. Mail-in ballots could still trickle in changing the numbers below.

Matt Reeves lost to Zahra Karinshak for State Senator, District 48. Campaigning spending reports are not finalized, and it appears he raised & spent an ASTOUNDING $250K. Yes a 1/4 million dollars for a local state seat.

Another tight race was between Betty Price & Mary Robinchaux for State Representative, District 48. Expect a recount as the difference is 121 votes.

The only are Republican that held his seat was John Albers vs Ellyn Jaeger for State Senator, District 56. Several Johns Creek readers wrote to us surprised to see Albers had a contender when we sent out the ballot to review a few weeks ago. Ellyn Jaeger did well with no name recognition against an incumbent.

The Congress seats were close too. 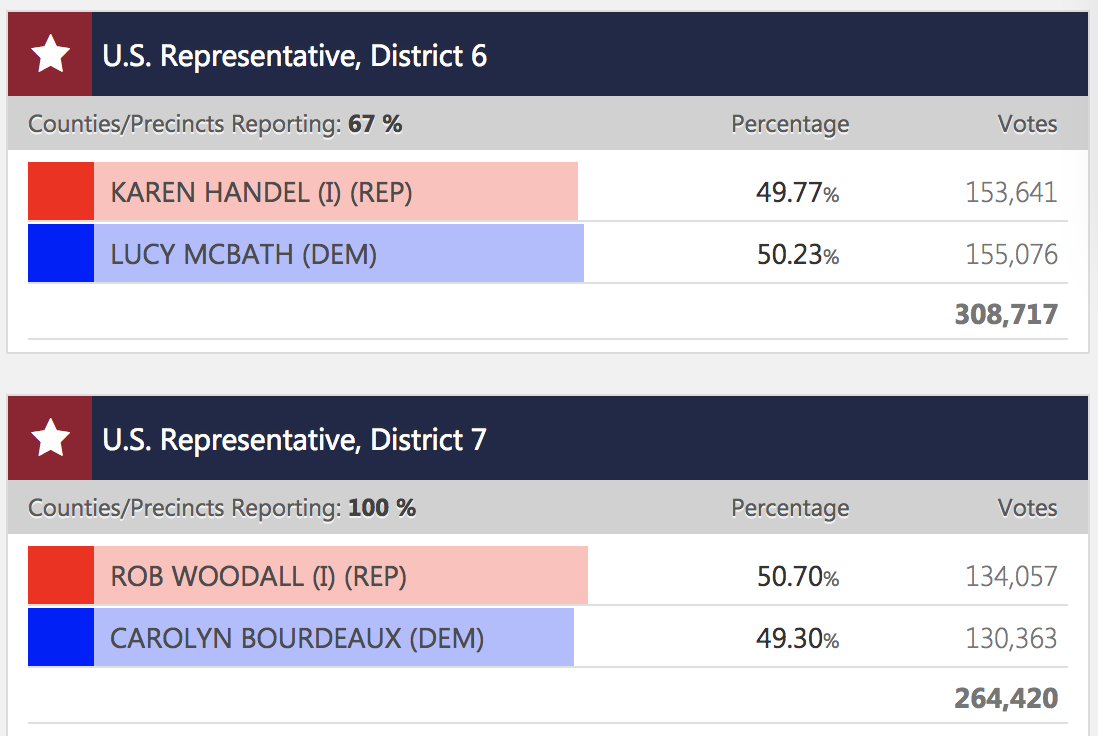 Overall, Fulton County voted for the Democrats in the Statewide seats.

All numbers are unofficial until certified by Fulton County Board of Elections & Secretary of State.

Source: Screenshots from Secretary of State &Fulton County Board of Elections websites.

I certainly do not want to live in area that is Democrat. I will be looking elsewhere to live.

BTW, I was appalled by a yard sign that said “Asians for Abrams”. Can you imagine a sign saying “Caucasians for Kemp”?

Gee, I wonder how this is happening! Time to move.

You are reporting news. Is your bias really necessary? “An astonishing 1/4 million”…really, you needed to add that? Your readers can come to that conclusion on their own. Disappointing.

Feel free to rent at Mir a Lago

I can assure you, previous commenters, that the Johns Creek area will not miss your close-minded attitudes. Enjoy whatever single-minded place you move to, surely it will be a very prosperous area (heavy sarcasm).

I just moved here last year. I am so glad I did! Blue Wave!

Happy to see JC turn Blue. As a life long Atlanta resident and son of immigrants, I have always known America is great. My parents taught us to live well below our means, max out our retirement accounts, buy real estate, invest in America, encourage higher education.

Very easy to excel in America if you truly want to. Indians and Koreans can establish financial strength within one generation of arrival, but many so called American conservatives do not, despite being in America for generations. If you live beyond your means, refuse to save adequately and refuse to invest in America you will and should get left behind and we are seeing that.

John’s Creek has among the best schools and highest per capita income. The Indians, Koreans and other minority groups have contributed to this. If someone wants to leave, please do. Chances are great the place you move to will have lower incomes and schools.

It’s not new voters or those just moving here. It’s people tired of the silly antics of the GOP and the constant fear and division being thrown at us. Throw them out.

Thanks for lecture on being prosperous in America Anonymous. I am VERY comfortably retired in a gated community. I appreciate good schools but I certainly don’t need them.

We moved from New Jersey, a heavily taxed state to Georgia where taxes were lower and most people were conservative with conservative values.

My Vietnam veteran husband (who always knew America was great) died recently and he was the epitome of frugality and hard work.

Judith, we’re all Americans. No more, no less than you.

GA House District 025 covers part of Johns Creek, also, does it not? I live in Concord Hall and that’s what’s on my precinct card.

4 Giant Electronic Billboards to be...