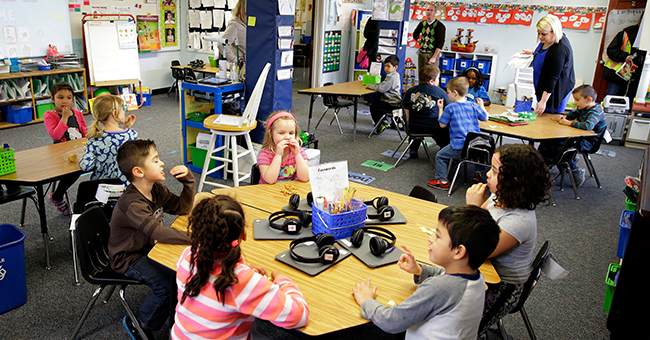 United Teachers Los Angeles (UTLA) has always been one of the more radical teachers unions in the country, and during the coronavirus lockdowns, they’ve taken their agenda to new extremes. In the summer of 2020, they presented the school board with a list of demands that seemed more like a ransom note instead of a good-faith effort at finding a way back to the classroom. They’ve partnered with Black Lives Matter-LA and turned students into BLM activists in an effort to defund both the LAPD and LAUSD school police. On March 1 UTLA President Cecily Myart-Cruz blasted Gov. Gavin Newsom’s school reopening plan, claiming it was “propagating structural racism” after accusing white and Middle Eastern wealthy parents of “driving the push behind a rushed return,” and the union was accused of racially targeting an LAUSD mom of Afghan descent because she had been an outspoken advocate for getting kids back in the classroom.

And then on March 5, UTLA announced the results of a week-long vote, claiming that 91% of their members refused to return to even a hybrid system until all staff members have been vaccinated or have been given access to the coronavirus vaccine.

If you are planning any trips for Spring Break, please keep that off of Social Media. It is hard to argue that it is unsafe for in-person instruction if parents and the public see vacation photos and international travel.”

Statement from UTLA to @FOXLA when we asked about the post:
“We have a diverse membership and they are able to post their views on personal Facebook pages and in this Facebook group – however, UTLA does not monitor nor is responsible for the content.” Parents angry. Story at 10 pm.

Melugin, who has been blocked by UTLA on Twitter, received the following statement from the union:

So UTLA would have us believe that the members of that Facebook group could post hunting pictures and no one would say anything? UTLA wouldn’t monitor *that* content? Someone should give it a try.

Parents Melugin spoke to were furious, especially parents of young children with IEPs, who haven’t been in the classroom for a year.

Actress Roxanne Beckford Hoge (disclaimer, a personal friend) posted this video and Twitter thread Monday morning begging people to sign the Newsom recall petition, if for no other reason, for the kids whose lives have been upended by losing a year of their childhood or who chose to take their own lives because of the isolation and depression brought on by the lockdowns. While not directed at UTLA (until the end of the thread, after Melugin had posted the UTLA Facebook screenshots), it’s safe to say that UTLA’s intransigence is one of the main factors keeping schools closed in the state.

I’m 💔 and 😡 enough to rant without makeup.

What @GavinNewsom has done to our kids is cruel. The deadline for sending signatures to #RecallGavinNewsom is March 10. @CA_Dem, Independents, @CAGOP parents should all sign, just to get him to listen.

Sign to stop #BigUnion from maintaining its stranglehold on California politics. Leading to one-party rule which does no one any favors. Except unions and their sweet, sweet pension deals

Sign because @BillFOXLA uncovered the tip of the iceberg of @UTLAnow’s race-baiting and strong-arm tactics that got them to a 90%+ vote to not teach in person. https://t.co/AGf2z6Dfde

It’s abundantly clear to anyone watching that these unions have zero interest in actually helping children. Many of their members do; those members should visit the Public Employment Relations Board and start a petition to decertify UTLA or opt-out immediately.

Kemp First To Set Up Newly...

Now We Know What Comes Next…There...