Limos & Liquor: The Decadent Cost of the District

Nothing but fine steaks, Limos & Liquor for our consultants hired to bring the Urban to Suburban Johns Creek.

There is an astounding number of expenses charged to the city revealed in Freedom of Information requests regarding the redevelopment planning of the District.

Under the guise of fear of fiscal uncertainty, Mayor Mike Bodker wanted to ‘start a conversation’ on how to get a better yield on private property in Tech Park, with the theory we could be more like our neighbors, change the ratio of being a primarily residential community and create vibrancy & economic development.

This hypothesis led the City to hire Urban Design Associates (UDA) for $250k. After UDA’s first trip in January, they billed the City for their expenses stating it was not approved in their scope of work.

In reviewing the contract, these trips were indicated as part of the agreement. It states the consultant is responsible for all costs and expenses incurred.

Yet, on Nov 25th, 2014, UDA had an ‘informative conversation’ with City Manager Warren Hutmacher and proposes a $20k increase. City Manager presents the UDA contract to Council on Dec 15th for $250k and omits the $20k. City Manager requested a change order in February and increased the contract to $270k, after receiving the bills in January. 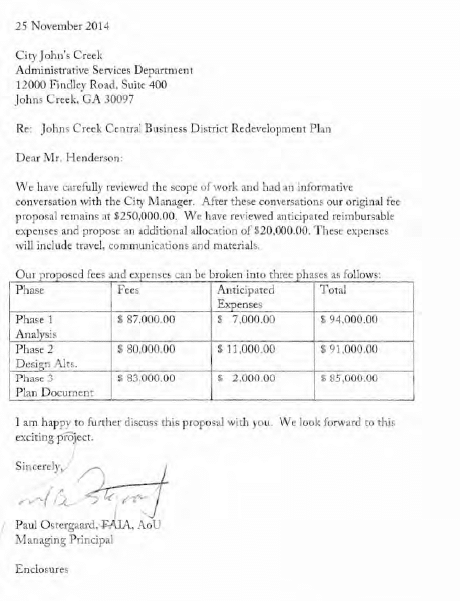 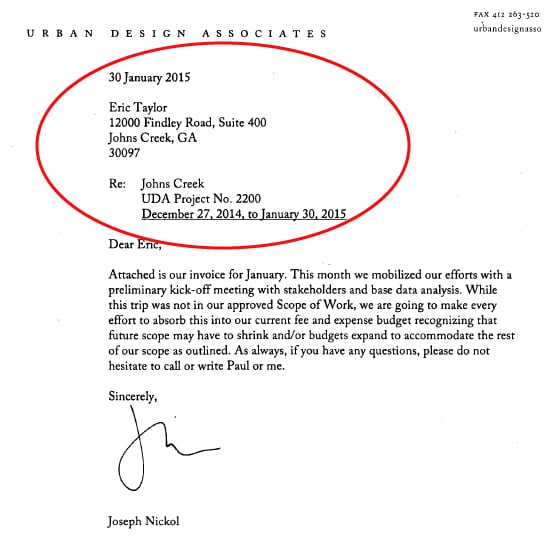 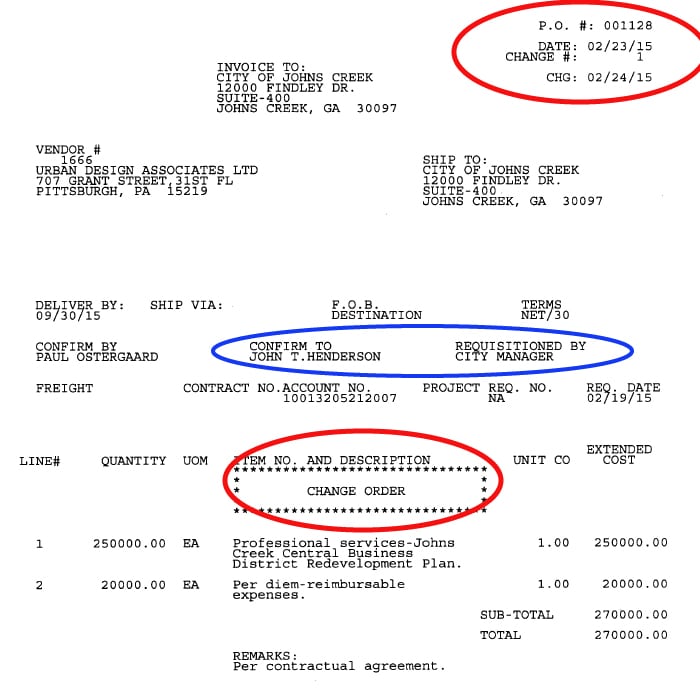 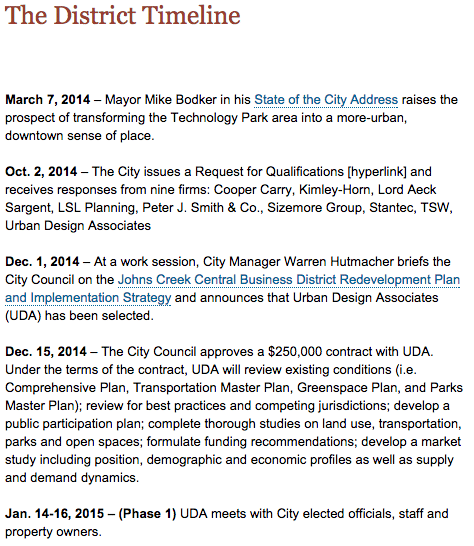 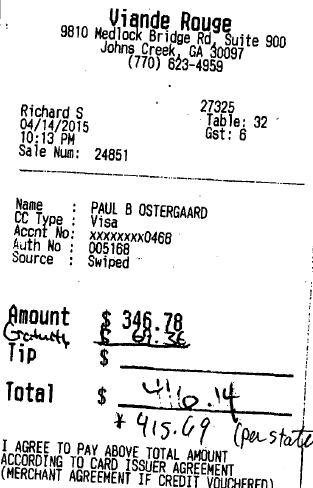 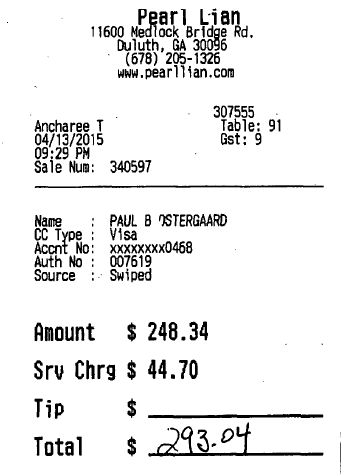 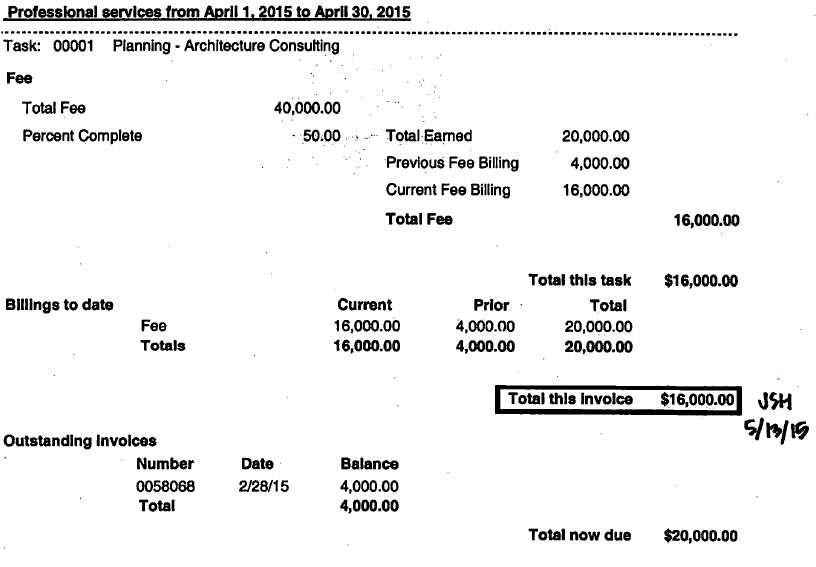 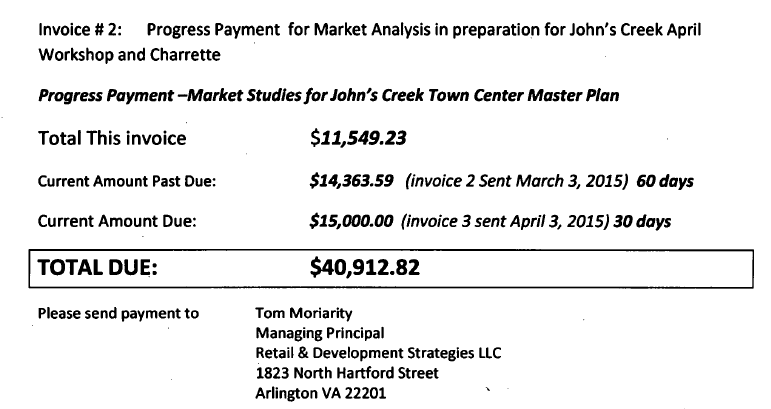 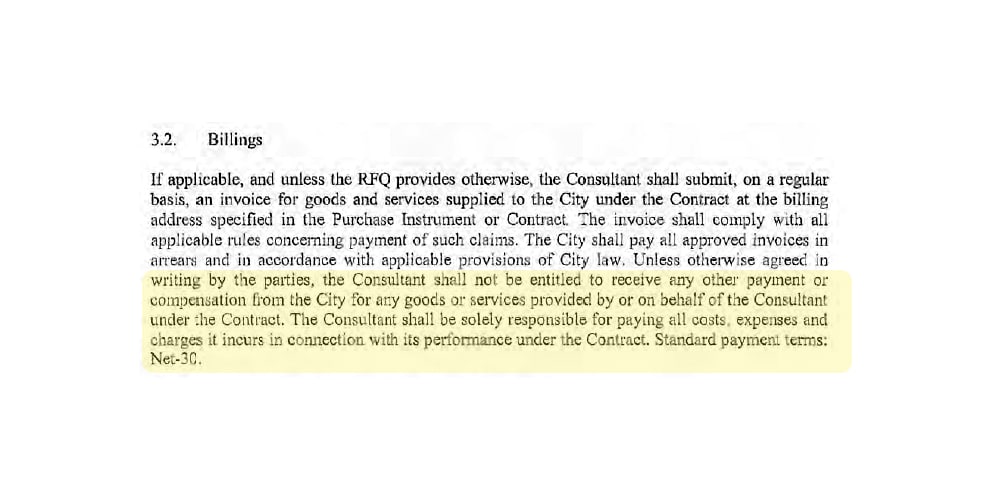 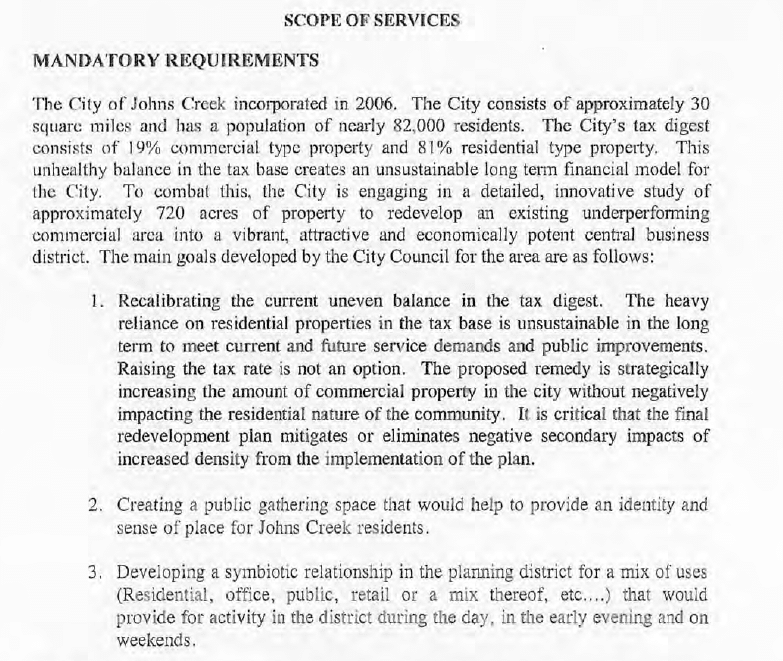 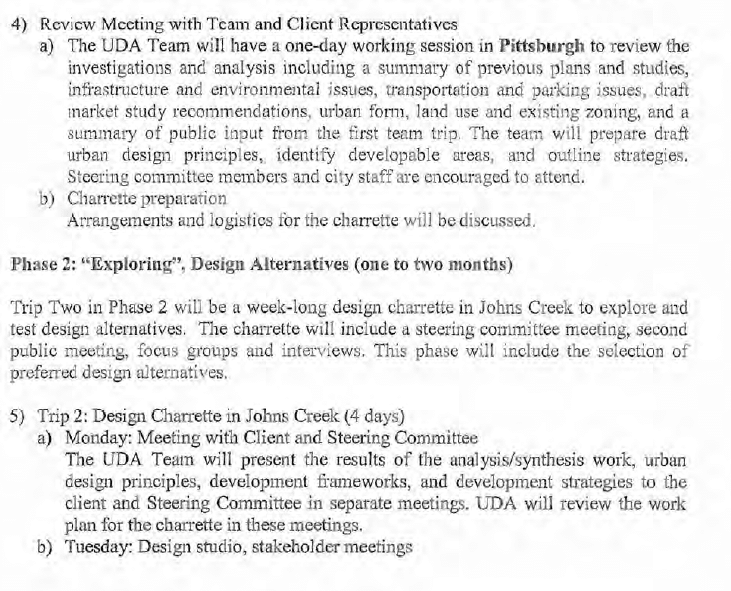 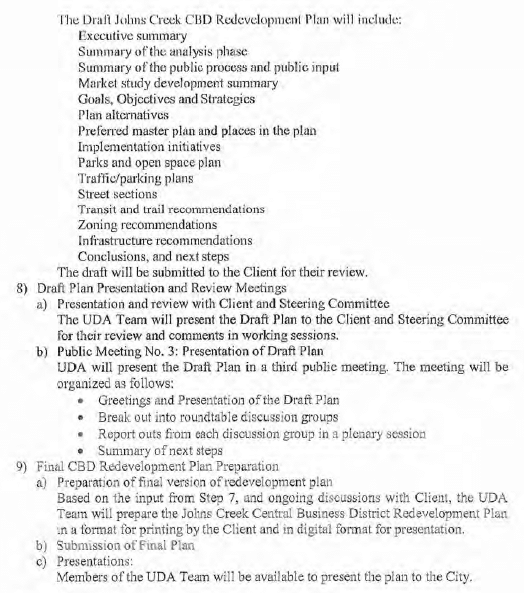 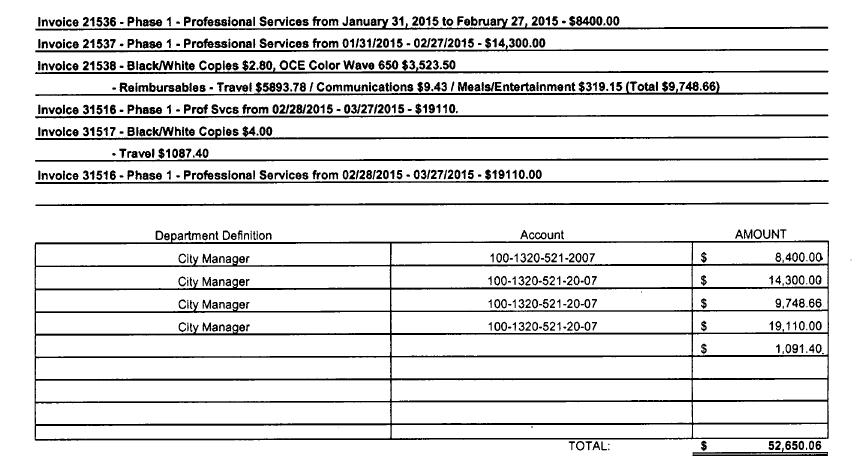 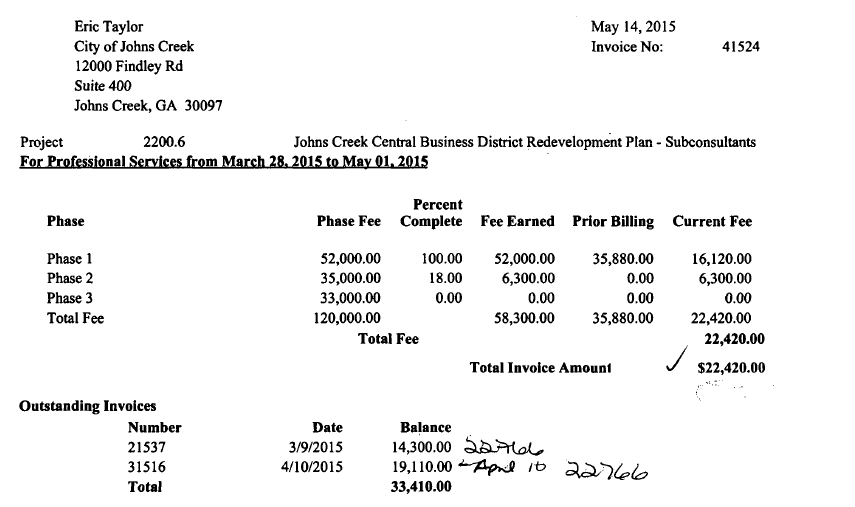 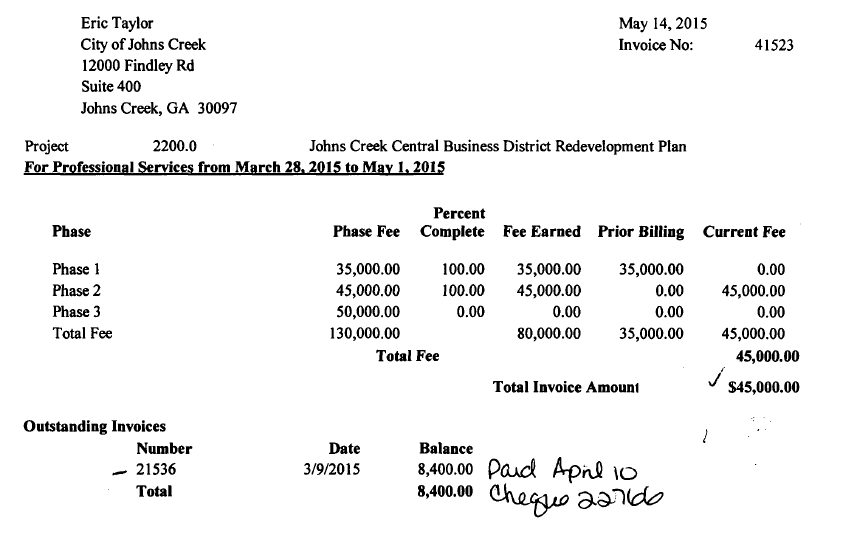 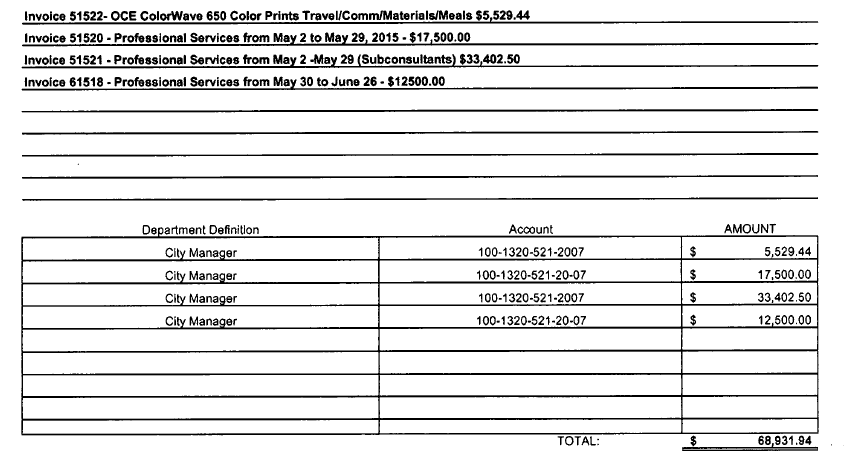 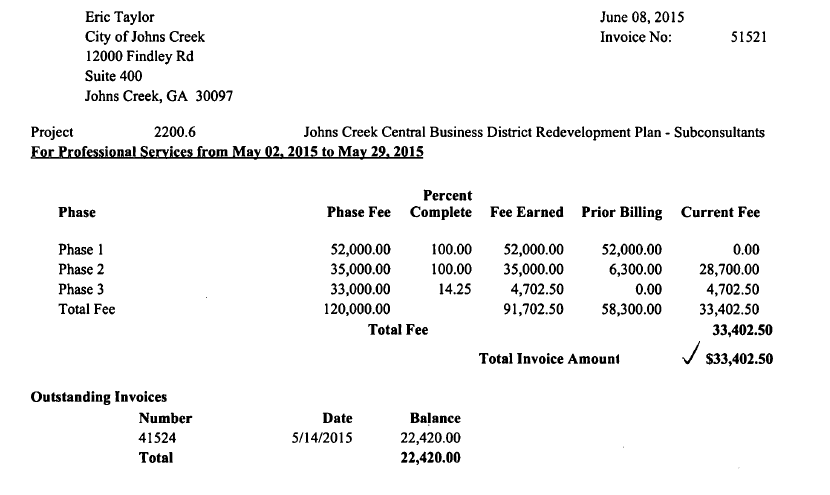 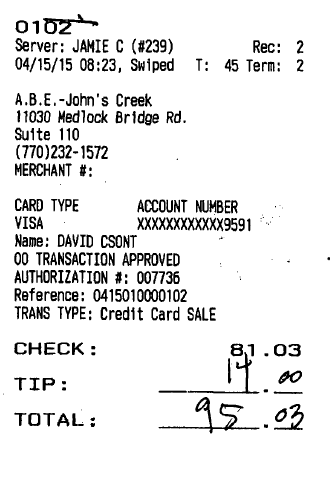 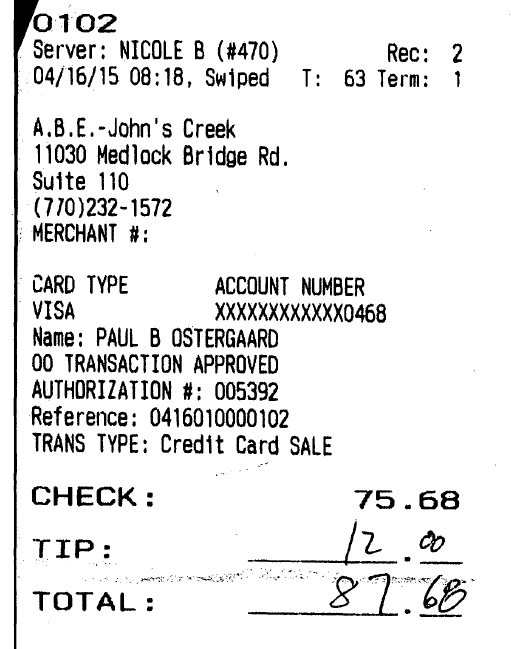 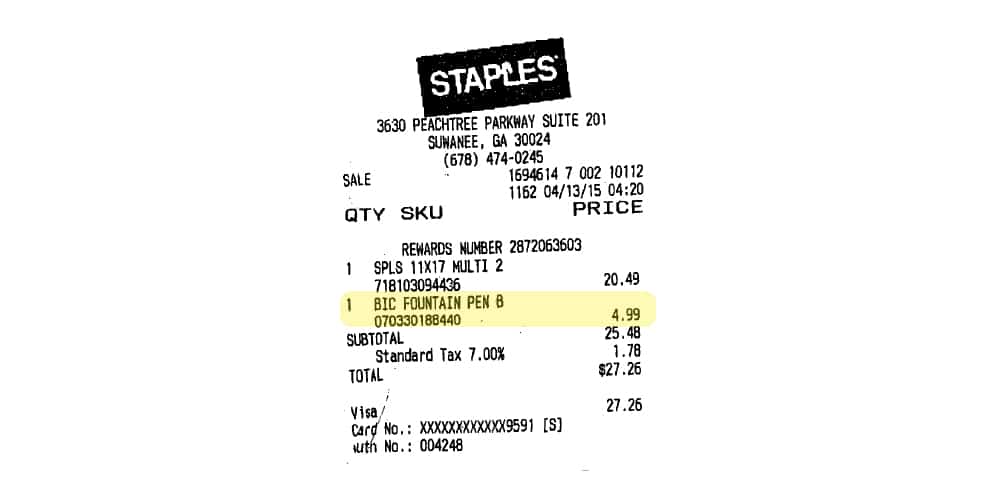 Many invoices billed to UDA are past due and appear to have gone unpaid for services rendered by subcontractors.

Other Expenses of interest charged to the City:

Multiple staff was embedded in this project. Communications, Community Development & other staff worked many hours including nights on the District planning and presentations.

The City Manager and 2 assistant City Managers also traveled up to Pittsburgh on April 8th for 1 night. That cost the City a few thousand.

This was days before UDA visited Johns Creek on 4/13 for the Charrette Presentation. Charrettes tested different types of density. Many of you can recall the Apartments Galore, which posted those charrettes.

Ernest Moosa was disappointed with the UDA presentation and that they were staying at a hotel in Tech Park. He suggested during a city council meeting, UDA stay in Peachtree Corners and commute 141 to experience the congestion the locals do. He even offered to drive them around town personally to show them how difficult it is to traverse the City.

Demolition plans are also included. Shockingly, one of the nicer shopping areas in the city (141 and MGF) are suggested to go into the proposal. 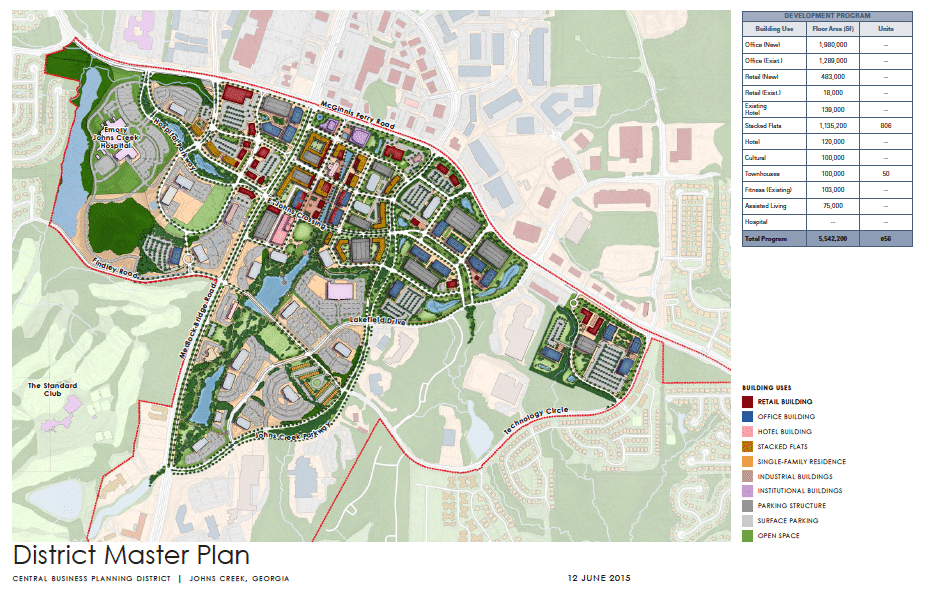 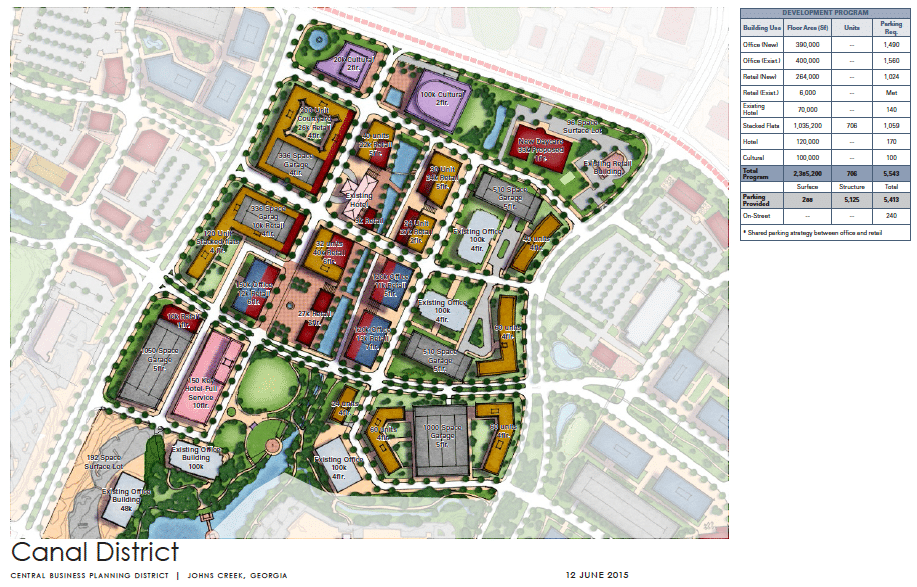 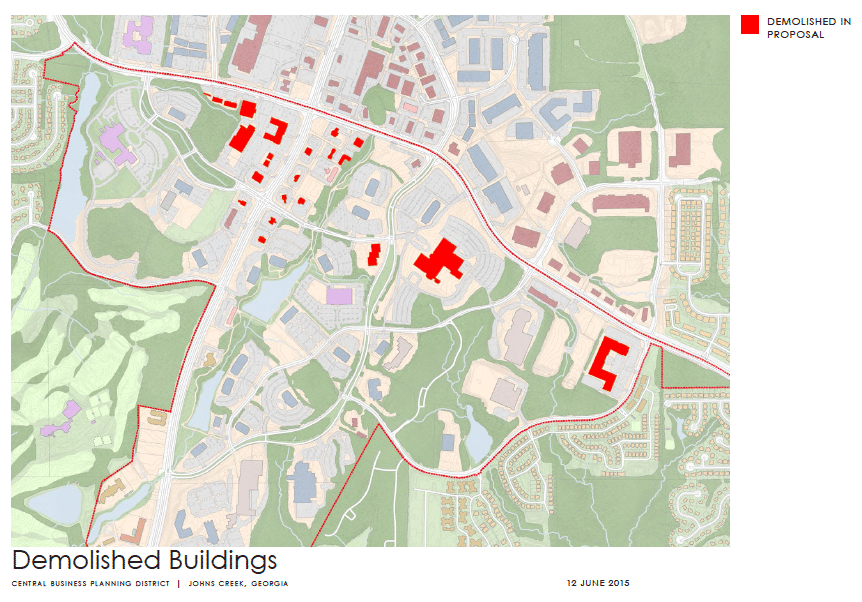 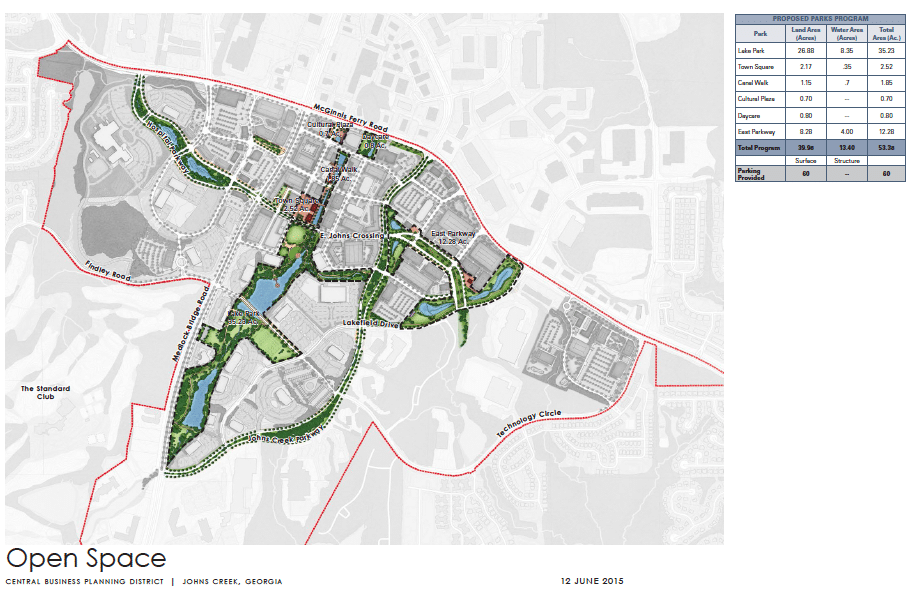 A Few days later on June 15, Community Development director Mrs. Sharon Ebert gave an update to the City Council on the district and stated a Vibrant downtown needs density, and we need feet on the street.

Mrs. Ebert recommended 2500 residential units in the Canal section of the District, the first desired to be developed of 6 subsections. She also indicated 275,000 sq ft retail, 1,000,000 office space & 300,000 civic space to equate to a vibrant downtown. She has previous work experience with UDA from up North.

The City hired more engineers to study the feasibility of building a man-made canal in Tech Park. Those costs are unknown at this point. The City also hired Strategic Planning Group to develop an economic plan, for $42k. This plan presents a blueprint for the District.

Information from the freedom of information act is not free. This records request was a challenge for senior staff. It took about 3 weeks to compile and $52. Unfortunately, the City does not keep the tally of the total cost of the District.

It is disappointing the City does not operate in an organized fiscal manner. It is even more disappointing to see our tax dollars spent in this manner, while we sit in traffic, while City Staff is planning private property for more people and traffic.

Vote for Stephanie Endres. She will nip this nonsense in the bud. I have her mailer on my fridge and she is a CPA and wants an online checkbook of all expenditures paid.

Once again I say this is not what Johns Creek was suppose to be for. We do not need an Avalon nor do we need a water feature. I have seen the canal in Oklahoma City and its was dirty, filled with dirty duck, and their poop on the sidewalk.

What the heck is this? The trick out of trick or treat? Is this part of the
Johns Creek’s logo, “Be the Exception”….and rip the taxpayers off?

I know from speaking to them that Radford, Endres, and Couglin oppose the District.

Other candidates have tiptoed around the issue, and have even endorsed the idea passively.

How many more tax dollars shall we spend on behalf of Tech Park?

Let Tech Park spend their own dollars on behalf of Tech Park.

Yes! Let tech park pay for the consultants for tech park and wine and dine em all they want!

I’m voting for Coughlin, Endres, and Radford as they oppose the District and will not spend our money in such lavish and frivolous ways.

I remember how councilman Lenny Zaproski suggested that we get the Urban Planning students at Georgia Tech to do this Tech Park design consulting work for us which would have been much lower in cost if not free. Their professors could have used this as a real life design project. We could have enriched our own Georgia students and kept the money in Georgia.

Instead, we had to hire the irresponsible and spendthrift UDA company who charged us the big bucks, charged us twice for travel expenses, and didn’t pay their subcontractors. Sounds like JC will have another lawsuit brewing based on non-payment of these subcontractors.

Our Mayor Bodker has caviar tastes and is responsible for this District idea and the disaster that is unfolding. It is unfortunate that City Manager Hutmacher was not transparent with the residents in presenting the additional $20,000 “all expenses paid business trip” by UDA to Georgia.

City Manager Hutmacher earns almost $250k in salary and benefits, yet when he came on board in April 2014, he hired 3 assistant managers while the former manager had only ONE. The cost of 2 additional assistant managers is substantial, and is probably directly related to the additional work associated with the District.

The residents have vehemently voiced their dislike for the District, but the Mayor continues to push it down our throats. WHY???????

I am voting for Coughlin, Endres, and Radford to join Lenny in his ONE-MAN fight against financial waste in our city!

The Greenhorns got bambozzled by bunch of consultants from the big city!

The residents of Johns Creek have been doing that already with how and where we buy homes and spend our dollars.

The absolute best way for Johns Creek to figure out what it needs to be is to let the residents drive demand. That is the best way to keep things from getting overbuilt.

That is the best way to keep us from having things built we do not seek.

It’s nice to see that some people dream big. But too many dreams end up as nightmares for the taxpayers down the road.

We will all be healthier, wealthier, and a whole lot less frustrated.

How despicable that JC is paying $8525 of our hard earned tax dollars on advertising the District at Regal Cinema even though no one except Bodker and some of his suck ups want it!

Seriously folks, is it possible to IMPEACH or RECALL Bodker?

The Difference is Clear! The Choice is Yours! The Time is NOW!
Elect: Radford

Upset at waste, Just don’t keep electing him. Bodker does what Bodker wants. He doesn’t care a hill of beans what we want.

And after spending all this money, we still have nothing, because city council doesn’t know what it wants and they went into this prematurely. This proves that the city should not take on the role of a developer, because it a risk averse, indecisive committee of novices. They should have known better. Vote Broadbent out for incompetence!

If you don’t vote today, then you cannot complain. Bodker isn’t running this year but his compadres are. Vote them out.

I appreciate the compliment.