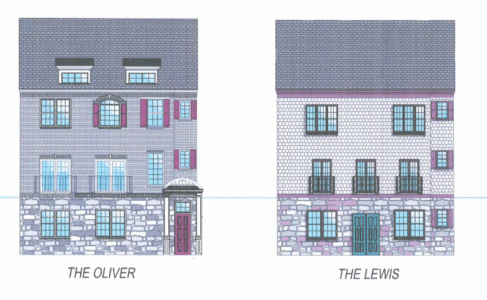 Developers are attempting to cram in more infill development before the new Comprehensive Land Use Plan becomes official this Fall.

On State Bridge Rd, near Long Indian Creek, the proposal is requesting to squeeze in a 12 three-story home development within 5 feet of existing homes that have been in the city since the mid-1980's.

The Property owner is CNF Community Holdings or better known as "Chabad of North Fulton". According to an article in the Atlanta Jewish Times, Mayor Bodker is good friends with Rabbi Hirshy Minkowicz. See the excerpt below:

Johns Creek Mayor Mike Bodker, who attends High Holiday services at Chabad of North Fulton and has a close relationship with Rabbi Minkowicz, noted that the rabbi’s home is in Alpharetta, but the shul and Rashi’s Campus are in Johns Creek. He said he’s happy to see work start on the new facility but knows the rabbi will ring his cellphone every time any problem arises during construction.

Local homeowners claim adverse effects include the negative impact on the neighborhood aesthetics, loss of tree canopies and stormwater runoff. This is in addition to the larger issue of Johns Creek becoming overdeveloped in most people's eyes and is already dealing with a traffic congestion issue.

More than 400 Johns Creek residents have signed on to a petition asking the city to reject this State Bridge Rd infill development.

The Megaplex Stacked Townhome Development has had a groundswell of opposition as well, along with a petition requesting denial. As of 9/20/18, 1700 residents have signed it.

Many residents question the cozy relationship Councilman Lenny Zaprowski has with Realtor and property owner Dagmar Sands. During his re-election, several yard signs were displayed on her property and adjacent owners properties, who are requesting the "Megaplex" rezoning together.

Dagmar Sands did a public comment this summer, thanking Councilman Lenny Zaprowski for meeting with her neighbors over the zoning of the properties on State Bridge Road. It has been said more than once from some on Council & Mayor Bodker, they do not discuss zoning cases, as to remain impartial. Johns Creek is the exception and the rules only apply to some.

Here is the video of her speaking about Councilman Lenny Zaprowski, along with comments about the traffic and difficulty pulling out of her driveway and returning home. Ironically, she wants to rezone the property to allow 208 units, which would compound the problem.

Both Councilman Lenny Zaprowski & Mayor Bodker have taken campaign contributions from Atlanta Realtor PAC. Here is the excerpt from the website:

What do you think neighbors? Should Mayor Bodker & Councilman Lenny Zaprowski recuse themselves, or do you think they can remain impartial, regardless of their relationships and campaign contributions from a Realtor PAC?