Proposed Georgia Constitutional Amendments –What Do They Mean? 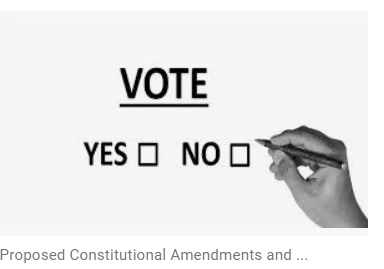 It is always troubling to read the proposed Constitutional Amendments our State Legislature puts on the ballot every few years.  They must hire a team of double talk experts to write these things so they sound completely different from what is actually going to happen. The Amendments and Resolutions are written in goobly-gook.

The following Amendments will be on the November 6, 2018, ballot. If you have been wondering about, or like most people have no clue about the Constitutional Amendments on the ballot, here is our take on them.

This amendment requires the legislature to allocate up to 80% of sales tax revenue from sporting goods sales toward land conservation. The kicker here is “up to” 80% of sales tax “could go” to protect parks, wildlife, etc., and would be put in a trust fund, but only after the State gets its cut. That is IF the state ever decides to fund the trust fund. There is no guarantee it would happen, even if passed.

This amendment would set up a new “business court” to have “predictable outcomes” with judges appointed by the Governor, not elected. This would be another power grab by the Governor to put more of his people in place. When you have a bad governor who puts his friends and business associates in judgeships, we all know what could happen. Additionally, NO TERMS are set for these judges. Even divorces could go through this new court system. And why would you go to court if the outcome was predictable already?  The explanation of this proposal is 4 pages long with 4 columns per page of little print. We do not need appointed judges, but elected judges that are accountable to the people.

We already have this law and the counties receive money from it, but the State doesn’t like the formula because the counties are getting more money than they thought they would. This would change the formula to take money from the counties and give more to the State.  There is a lot of goobly-gook wording in this proposal, and quoting from the Liberty Group, “The covenant contents are not specified and the amendment appears to be custom tailored to give a tax break for a special interest.”  Jasper County would stand to lose as much as $400,000 if this amendment passes.

This amendment would give victims of crimes the right to be notified of pretrial hearings, trial proceedings, parole hearings, and release or escape notification. This is called Marsy’s Law. It originally had language that could have negatively impacted the right of a defendant, but supposedly that problem was removed during the legislative process.

The Georgia Public Policy Foundation, a nonpartisan think tank, has voiced concerns about that there could be additional attorney costs and costs for support staff for victims, 2) the risk of infringing the rights of someone accused of a crime, 3) an increase in false accusations, and seemingly most severe, the accused could “lose their right to be presumed innocent until convicted.”

We have not been able to reach a consensus on this amendment.

We already have this law, it is called ELOST and most every county is paying it with an extra 1% sales tax.  Senator Ellis Black, a sponsor of the Amendment, in an interview said, “The measure was designed to put provisions in place so that a school system with a majority of the full-time equivalent (FTE) students can place a renewal of an ESPLOST on the ballot before voters without having to ask all the systems within a county.”   We already have ELOST laws, and we do not need more laws on the books.

To see the actual amendments and resolutions you can go to this website:http://sos.ga.gov/admin/uploads/2018_Constitutional_Amendments_and_Referenda.pdf

Please VOTE, and exercise your freedom to do so!

I agree Vote No to these useless amendments

More than useless, they create more issues going forward that the voters will have even further distance from resolving. We have less and less impact on issues as voters every year. Just think GDOT, the ATL, ARC, and other quasi-legislative branches we do not vote directly for. And now a custom tailored court system for the business community? Now which businesses in our community do you think sought this and which do you think will be harmed by it? I know my answer.