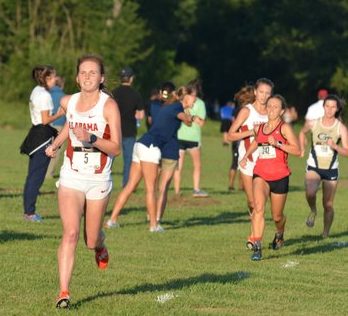 It takes a lot of confidence to approach an SEC team about becoming a walk-on athlete.

Johns Creek’s Shannon Marsh had that confidence, even after her senior year of high school left Marsh with increasing pain and discomfort in her hip.

Shannon, who attended Johns Creek’s Northview High School, ran cross-country and played soccer for the Titans during her four years there.

It was only natural that Shannon became a high school runner. Shannon’s first 5k was in the third grade. She continued running and getting faster through middle school and then at Northview.

Shannon developed a pain in her hip which put the brakes on her training after her senior year. Rather than allow the injury to sideline her, she sought medical help for an injury that would have been very difficult if not impossible to diagnose just 20 years ago.

Many athletes tend to push through the pain. Rest the injury and ice and hope it goes away. That was not going to be possible for the injury Shannon had. And fortunately Shannon found the right physician sooner rather than later, and who had the technology and experience to get Shannon back on the trails running as fast as possible.

Dr. Schrader has been practicing for more than 20 years. He received training at Harvard Medical School and the Muller Foundation in Switzerland and developed a special interest in pediatric, adolescent and young adult hip preservation and hip problems.

Dr. Schrader is the Medical Director of Children’s Hip Program.

I spoke with Dr. Schrader of Children’s Healthcare of Atlanta about Shannon’s injury. Shannon had femoroacetabular impingement or FAI. Had Shannon waited, this injury simply would not have gotten better on its own and would have become more debilitating.

Using some of the latest technology, Dr. Schrader was able to determine the cause of the impingement and Shannon had surgery as soon as possible. Shannon had a bony abnormality in the hip. This abnormality limited the range of Shannon’s hip, and as she tried to push the hip to the range needed for running, the pain intensified.

The solution would require surgery. In surgery, Dr. Schrader would then shave this abnormal bone growth down and restore the full motion of Shannon’s hip.

According to Dr. Schrader, FAI, or hip impingement, is becoming more and more common. And we are seeing this in younger patients because they are more active.

Johns Creek parents know this clearly. Kids today have more organized sports to choose from than ever. With that increase in activities and the intensity of those activities, there are going to be more issues that arise.

Thirty or more years ago, Shannon’s injury may have been diagnosed simply as arthritis. It would have been the end of Shannon’s athletic endeavors.

Today’s medical imaging is changing the outcomes for patients like Shannon, as advancements in surgery techniques and the tools that make it possible to remedy the problem.  “Getting the right diagnosis is critical”, said Dr. Schrader.  Shannon was able to get that right diagnosis by finding the best physician.

Surgery on her hip after her senior year running could have been a setback for some athletes, but not Shannon. Graduating from Northview, she is now a student at the University of Alabama pursuing a degree in Exercise Science and Physical Therapy.

Approaching the school’s Cross Country team about being a walk on athlete, Shannon has earned herself a spot on the roster as a freshman. She has excelled in her running and is faster than ever as she approaches her sophomore season and the Fall Cross-Country schedule.

Cross-Country has already started this fall and Shannon’s goal is to break 17 minutes in the 5K (3.1 miles). She has been training by running up to 70 miles a week this summer.

While Shannon was a student at Northview, she would do her carbo-loading( runners load up on carbohydrates before races) at Trattoria 141 in Johns Creek. Coach Mike Morris and Bill Hedgecock were both positive influences for Shannon while she attended Northview High School. Shannon also shops for running gear at Fleet Feet Sports located in Johns Creek.

“Why do you love to run” was the question we asked Shannon. “Running is a sport where your hard work shows up at the starting line, you go from start to finish”.

Shannon has found a variety of places to run those 70 miles per week. Some of her favorite places are Kennesaw Mountain, the Big Creek Greenway in Forsyth County, and the trails near the Fish Hatchery, just south of Lake Lanier.

In the not too distant future, Shannon would also like to compete in the 10K on the track and has set a goal of two marathon races-one being the Boston Marathon.

When you are a runner, there are no shortcuts. Your training must be completed by only you. Shannon is proving that when faced with an injury, you can get the proper attention. And then you can be off to the races.

Shannon can run the entire length of the City of Johns Creek, faster than motor vehicles, during rush hour!