Many of you may recall the Super Tower land behind Pikes, adjacent to Johns Creek High School, and City Trail system.

The City bought land, had the easements and building permits approved for a 420 foot Super Tower, with flashing high intensity lights to ward off airplanes.

It was expected to be over 100 feet taller than the Statue of Liberty.

Mayor Bodker and City Staff were highly criticized for even considering the plan, let alone pursuing it, all without due diligence.

Citizens vocalized mass opposition, which resulted in the tower being placed in Forsyth County. 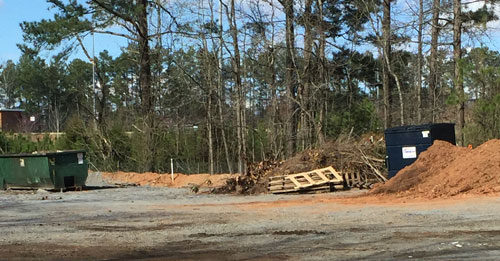 Roadkill in the dumpsters are ruining local businesses.

Nonetheless, the City bought the property. Now has allowed Public Works to utilize it for for dirt and gravel storage.

Public Works also has a few dumpsters in the lot. And that is What’s Stinking.

The dumpster have become a public safety concern, quality of life, as well as economic issue. Roadkill and waste is dumped in the dumpsters, creating an odor and stench that’s most unwelcome.

This is negatively impacting Pike’s business. Customers do not want to shop for plants with the rancid odor in the air.

With the millions of dollars the City has spent for the trail system in the area, wouldn’t a playground and benches be better for this City owned land? 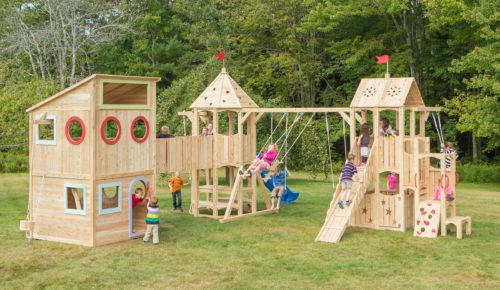 Wouldn’t a playground like this be a better use of the land?

A beautiful playground, garden and greenery would make it a wonderful destination.  Walkers and strollers, could help nearby businesses with foot traffic.

Neighbors, should the land be converted into a playground and garden?

What a GREAT idea for providing the residents and families something they could use and enjoy together. I hope the city is reading and will consider! Far greater use of land than many other options!

City hall has told our neighbor there is nothing to be done about the rotting carcasses.

Our local leaders have failed us. They hire incompetent staff and do not hold them accountable. Low standards, high pay.

Our area is getting shafted left and right. We cannot get out of our subdivision on grove point, all the traffic on Medlock Bridge, we deal with 37 Main music, JCHS issues, 400′ tower, billboards and now rotting roadkill.

I wonder if our Mayor Mike Bodker is on another vacation in Destin, staying at a developers million dollar condo on the beach…again?

You now deserve all the discomfort that is left now that 37 main is gone. You will reap who you have sewn. I will continue to laugh and stay as far away from your crap city as possible. Enjoy no longer having a place you can ride your stupid golf carts up to so you can get drunk and drive home. Or how so many of you like to continuously use that parking lot as a cut through going way over speed while you type away and talk on your cellphones.

Maybe the post should have been called $150k dumpsters :), since the City paid that much for the land.

That Playset from Cedarworks is $17k.

With the City on track to spending almost a staggering $90million dollars. The cost of this playset is what the city approx spends in 1.5 hrs.

A playground or a dog park would be very nice!

I agree with the comments on Medlock Bridge Subdivision seems to be the picked on neighborhood in the city. I think a nice playground would be OK but where do people park. It is so busy around their I had to encourage children to play in the area. I was thinking of a dog park but then we have the same issues and what if a doggy got loose. What’s wrong with leaving it as a natural area with a walk. Nice we paid millions for the sidewalk thru Technology Park so the city tax payer can pay for the up keep.

No public parking, as that may encourage out of city visitors.

It would just be for local walking residents in the area, beautiful garden and benches and a playset for the kids.

Right, need to restict access to all out-of-area people from coming into Johns Creek to use our facilities. Let’s start by denying Alpharetta and Roswell residents access to Ocee Park – not their land, not their taxes keeping it up. Now, if we could just figure out how to keep Forsyth County transients on their own side of McGinnis Ferry…

It is one acre. It would not be restricted to out of area people, just not have a parking lot.

there goes the neighborhood! probably not anywhere near the mayor’s house , right ?

Who’s watching the government spending? I vote for the play ground!
Makes much more sense.

Doesn’t Medlock Bridge already have a subdivision playground? What other neighborhoods are within wlaking distrance of this lot?

Most large subdivisions have playgrounds for their residents.

There is townhomes and apartments across the way on State Bridge Rd and more townhomes being constructed nearby.

Also Riverclub & St Ives subdivision is In proximity and those HOAs do not
Have playgrounds.

Well over 1000 homes within walking distance.

Move the dirt, gravel, old traffic signs, and all the crap down to the Cauley Creek Park…This junk should not be stored near neighborhoods.
Make this a cute little pocket park complete with landscaping and benches, at least!

I’m all for getting the rotting carcasses out of that space, however, the initial and on-going costs of maintenance, upkeep and insurance for a single “playground” with a swing appartatus is not prudent. We have miles of walking paths, two parks, most HOA’s have playgrounds and almost everyone has a car and can drive to a park playground if needed. The cost vs benefit of a garden of playground which would serve very few people in reality may not be the best solution. If anything, it will end up being another location where teens hide at night to drink and smoke pot. Medlock Br subdivision has a huge playground area. The largest of any subdivision I’ve seen actually. The apartments are on the opposite side of Statebridge and could be a death defying walk for children and adults alike. The elementary school with playground equipment is just across the road and people can take their kids their to play in evenings and on weekends. If you can get Pike to maintain a garden forever for freee, great. Otherwise, same thing. huge long term expense with very little return in terms of overall benefit to the community. We need to start finding ways to stop spending money and not inventing low return on investment ways to spend more money. Just the humble opinion of one fed up with waste taxpayer. Peace.

JCP Featured in The Guardian Newspaper...