Diver comes face to face with a giant anaconda in a river in Brazil, and he follows it to capture more footage!

Being afraid of snakes sounds perfectly normal, as fear of these slithery creatures is one of the most common phobias. Scientists believe that most of us learn to fear snakes very quickly in life, and their features and habits give us the willies throughout our entire life!

Even if you are one of those who do not fall into this category, I bet you find anacondas terrifying! For the rest of us, they are a magnified version of our worst nightmare! Although they are not venomous, the strength and size of anacondas leave us horror-stricken!

What’s more, these snakes can remain underwater for up to 10 minutes. While they live in marshes, swamps, and murky streams in South America, the Formosos river in Brazil is probably the only place where they enjoy swimming in crystal clear waters.

It was there when two people had a once-in-a-lifetime encounter! The hibernation period of this dino-like reptile lasts from the end of July to the beginning of August.

Back in July 2019, Juca Ygarpe and Bartolomeo Bove met a colossal anaconda, weighing about 198 lbs (90 Kgs) and measuring 23 foot (7m)! In the footage they filmed, the anaconda can be seen enjoying the time on the bottom of the river.

When it notices the camera, it starts snooping around it, flicks its tongue, and swims off. To capture more footage, Bove, an expert shark diver, and underwater videographer, decided to follow it!

His video is a perfect opportunity to learn more about this amazing creature.

He maintains that people have mislabeled anacondas as being aggressive:

“The rivers and the bodies of water around the Bonito area are the only places in South America here anacondas can be found in crystal clear waters, and therefore diving with them is possible.

As shown in the footage, the anaconda swims calm and peaceful completely indifferent to our presence. Sometimes she comes closer, curious about my camera, licking the lens.

The behavior of the anaconda debunks the myth that it is an aggressive and violent creature that can endanger people’s lives.”

The green anaconda is the largest type of snake on earth, which can reach and up to 30ft (9.1 meters) in length, and 550 lbs (250 Kg) weight. This fast snake kills the victim by wrapping its body around it while constructing its breathing.

Green anacondas have a diverse local wildlife diet, which consists of turtles, wild pigs, capybaras, and even jaguars!

These astounding snakes can adjust their jaws to be able to devour prey much larger than themselves. Yet, Bove described his experience as unbelievable and hopes that the footage he documented can reveal another side of these snakes.

“No words can do justice to the sensations that I was really feeling during that experience.”

Watch the video below: 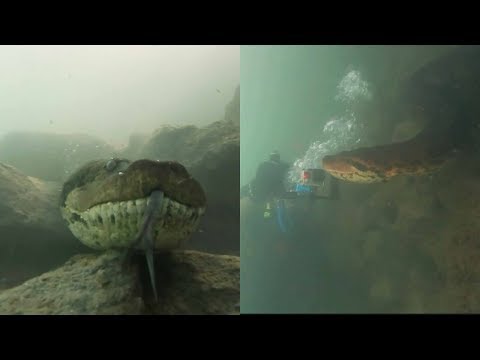