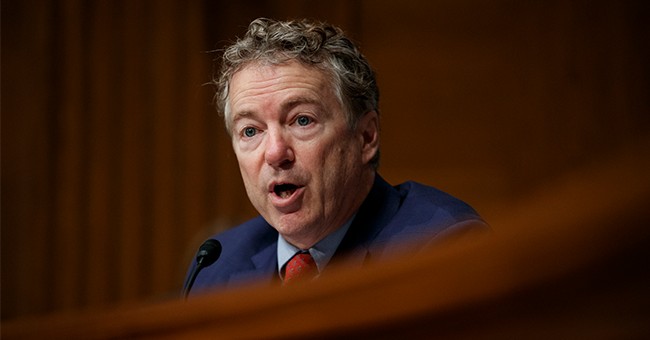 Welcome back to the Twilight Zone. We’ve gone there twice so far today, but the third time is definitely the charm. Joe Biden in January nominated Rachel Levine, Pennsylvania’s top health official, as his assistant secretary of Health & Human Services. Levine would become the first openly transgender federal official to be confirmed by the U.S. Senate.

As noted by conservative opinion columnist Rita Pahahi, Levine appears to be a natural for Biden and today’s Democrat Party.

‘Dr. Rachel Levine, President Joe Biden’s pick as Assistant Secretary for the Department of Health and Human Services (HHS), advocates for the use of puberty blockers and the medical transition of MINORS.”

That she does — and then some.

‘Dr. Rachel Levine, President Joe Biden’s pick as Assistant Secretary for the Department of Health and Human Services (HHS), advocates for the use of puberty blockers and the medical transition of MINORS.’https://t.co/4nzafzV64C

Paul, who as an ophthalmologist is a medical doctor, asked Levine, point-blank:

“Dr. Levine, do you believe that minors are capable of making such a life-changing decision as changing one’s sex?”

Levine launched into a non-answer answer — which proved to be par for the course.

“Transgender medicine is a very complex and nuanced field with robust research and standards of care that have been developed.”

At one point Paul grilled Levine over the use of controversial off-label hormone drugs.

“You’re willing to let a minor take things to prevent their puberty, and you think they get back?  You give a woman testosterone enough that she grows a beard. Do you think she’s going to go back looking like a woman when you stop the testosterone? You have permanently changed them. … We should be outraged that someone’s talking to a 3-year-old about changing their sex.”

And that was the mild stuff.

“You’re willing to let a minor take things to prevent their puberty, and you think they get back?… You have permanently changed them… There’s no long term studies. We don’t know what happens to them.” pic.twitter.com/a7AJkInfPG

Paul then broached the subject of genital mutilation.

“Genital mutilation is considered particularly egregious because, as the WHO notes, it is almost always carried out on minors and is a violation of the rights of children.”

Paul noted that most genital mutilation is not carried out by force but voluntarily, by social construct or social norm. “American culture is now normalizing the idea that minors can be given hormones to prevent the biological development of their secondary sexual characteristics,” he said — and then this:

“Dr. Levine you have supported both allowing minors to be given hormone blockers to prevent them from going through puberty, as well as surgical destruction of a minor’s genitalia.

As Levine continued to bob and weave, Paul at one point said:

“I’m alarmed that you’re not saying they should be prevented from making decisions to amputate their breasts or genitalia.”

Apparently with popcorn in hand, our friend Caleb Hull was enjoying the show.

As I was writing my previous piece on Wednesday’s Senate confirmation hearing for Xavier Becerra— Biden’s nominee for HHS secretary — and his refusal to identify a single abortion restriction he would support, I thought a bit about how the liberal media and the Democrat Party itself worked tirelessly to package Joe Biden and Kamala Harris as this “moderate,” “pragmatic,” “mainstream” Democrat duo.

And now even more so while writing this piece.

As the adages suggest, we are what we do. Words are cheap, actions matter. What we’ve seen from Joe Biden and the Democrats in little more than a month should ring the bell loud and clear: the radicalization of the Democrat Party is manifesting itself in troubling concrete ways on a daily basis.

It must be confronted and challenged every step of the way. And it must be stopped.

And props to Sen. Rand Paul. He is being skewered by the left “as we speak” for “launching into a transphobic rant.” These people are insane.

Related: Kevin Sorbo to Conservatives: If You ‘Sit Back’ While ‘American Culture Is Being Destroyed by the Left,’ You’re Doing It Wrong

Freedom Rings In Savannah Despite Local...