The Billboard of ill repute

The Billboard of ill repute! Clear Channel rolled out the welcome map with Wanted Criminals and HIV Tests on their new LED Billboard on Medlock Bridge Rd & State Bridge Rd.

These advertisements are all located next to the 2nd most dangerous intersection in Metro Atlanta. There are 4 schools and 2 churches in close proximity to the bright sign. 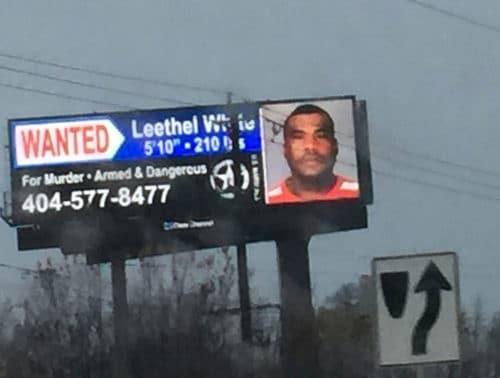 It’s unfortunate, that Johns Creek is the safest City in Georgia, and has to advertise Wanted Criminals whose crimes were committed elsewhere.

The CDC is pushing a “We’re Doing It” campaign for HIV Testing.
–
The other ads in the cycle were fluffy charity ads and were subsequently swamped with several complaints concerned about the potential association with less wholesome advertisements. Residents received replies back from the Charities were told the ads were ‘Free’ and they are in the process of being removed.
–
Much of the advertising on the other LED billboards in Johns Creek are Public Service Announcements & Non-Profits.

So how does Clear Channel make money, if they don’t have full paying ads?

Clear Channel’s controversial RADAR program, tracks, and targets residents with their cellphone data. That raises local concerns with the billboards so close to residential communities. Are they tracking within the homes too?

The billboard settlement terms negotiated by Mayor Bodker and Councilwoman Cori Davenport proudly toted spreading the billboards throughout the city. Rather than concentrating them to a few roads.

With the billboards spread to the 4 corners and middle of the City, Clear Channel has the ability to gather data throughout Johns Creek.

What are your thoughts on The Billboard of ill repute?

Disgusted with the lousy Billboard Settlement? Please attend and share your thoughts during the Public Comments.

It’s only 45 minutes of your time versus a lifetime of TV’s in the Sky!

Never say never! The council says nothing we can do? Well as shown in last national elections we the people can do a lot. Like vote everyone out and replace you with a council that will fight this blight! We need to organize against all advertisers and get volunteers to hold signs in front of these eyesores to encourage contacting local merchants that we will boycott their businesses if they use this media..i will be put out of town but there in spirit..YES WE CAN abolish these eyesores! Where does the Chamber of Commerce stand on this?
Mighty good book they have to contact all JC merchants?

1. Boycott big box retailers in that vicinity. Big box uses billboard advertisers throughout country.
2. Is JC getting any signage fee’s from those advertising on the billboards? If not, why? Each billboard sign is a “fee” and each advertiser on it is a “fee” with “each” screen change.
3. For each accident by the billboards, have police department issue citations against advertising company and company (s) advertising on billboard as “causing vehicular traffic distraction” with large fines and court appearance.
4. I didn’t know that JC City Council had authority to authorize invading public privacy by collecting this data?
5. Has the FTC authorized advertisers to collect this type of data in this manner?

City Hall OMITS the Most important...