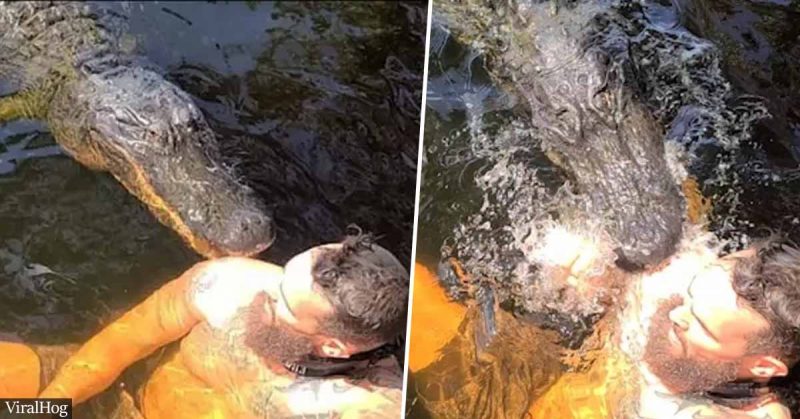 Being close to animals is easy and grateful, but sometimes, if they are larger, stronger, and dangerous, things can go in the wrong direction. Therefore, one has to be extra careful and skillful to prevent incidents.

Luckily, when John Braje went swimming in the Miami lakes in the Florida Everglades with his friend, a 13 ft large alligator, and the predator nibbled him, he knew what he had to do.

The self-confessed adrenaline junkie later explained that this was not the first swim the two of them had together, but it was the first time the alligator, named Elvis, had bitten him.

The entire thing was recorded on video, and the alligator can be seen going towards Braje and biting him on the shoulder. Luckily, he reacted very quickly, jumped out of the water, and remained unharmed.

Braje shared the video of the incident on Facebook and wrote:

Thinks just because he’s bigger than me, that he could bully me!!!🐊🐊🐊

No hard feelings though. He was just displaying dominance or maybe even just curious. IF he wanted a bite, I wouldn’t be on FB right now, lol…

After the initial shock, some people even joked, calling him the true “Florida man”.

Many were worried, commenting on his bravery/ stupidity, but Braje explained that this is neither the first time his friend does it:

“I’ve had plenty of interaction with him in the past. I think maybe because there were a lot of people around, he felt he needed to display dominance but normally he’s really chill… IF he wanted more, he could have got it. That’s my buddy.”

Watch the terrifying video below: