World Economic Forum Says ‘Lockdowns Are Quietly Improving Cities Around the World,’ What They Want Next Is Scary 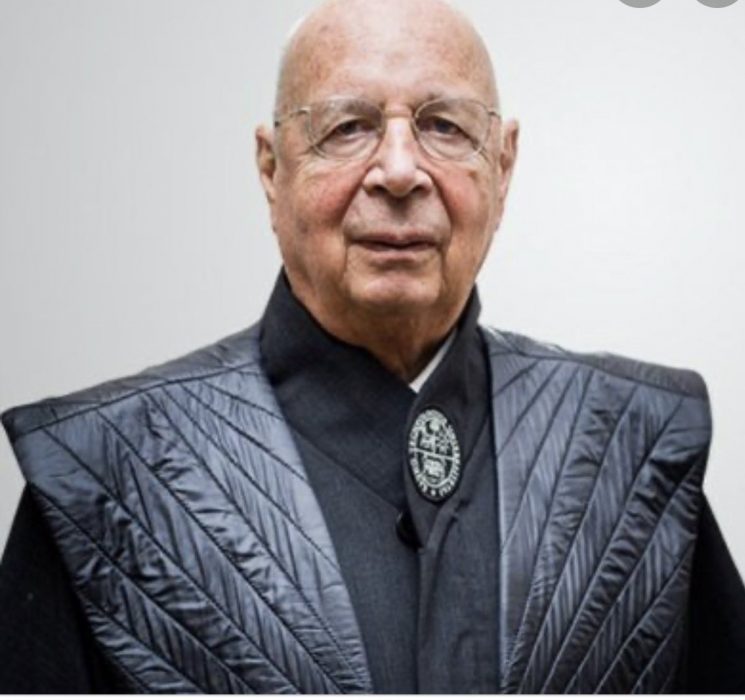 I wrote a story back in November about the Great Reset and the World Economic Forum which is its principal proponent.

In that story, I also wrote about how Joe Biden seemed to have borrowed from their language with his “build back better slogan” that Boris Johnson used as well, so it looks like Biden plagiarized that from other people, too.

But the World Economic Forum put out a video that is just striking for what it says and what it doesn’t say. Let’s start with the principal point of the video: “Lockdowns are quietly improving cities around the world.” Oh, my.

Let’s hear what they have to say.

Lockdowns are quietly improving cities around the world. 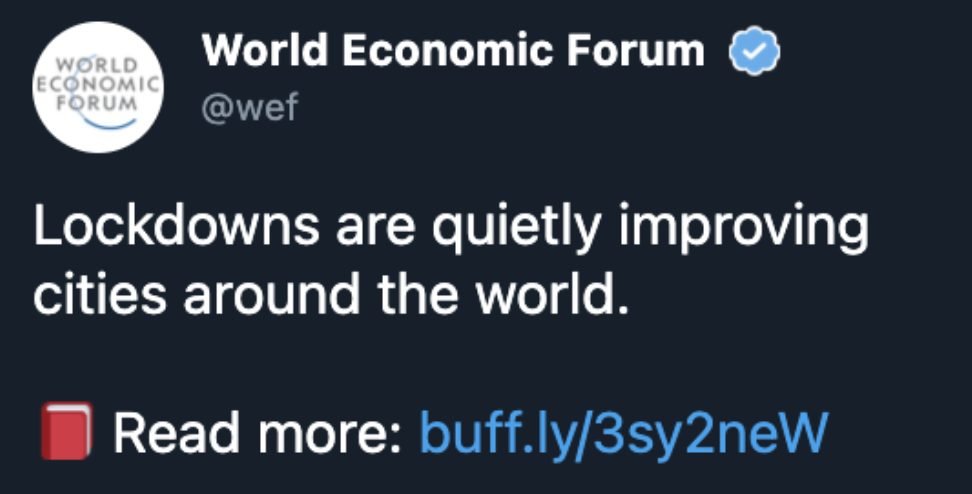 The quiet (from people being locked in, unable to work or carry on their lives) reduced the ambient noise, the WEF says. “As fewer people used transport and factories closed, the quiet enable scientists to record small earthquakes they would usually miss” and there were also “record falls in air pollution” and carbon emissions dropped seven percent. But it wouldn’t slow climate change, the WEF says, “unless we lock in emissions cuts.”

Think about what they just said there. The cuts came from people being completely disrupted and cut off from their lives. They want to lock those in. Sure sounds like they want the lockdowns to become permanent.

Talk about enemy of the people. Lockdowns are destroying cities around the world. Millions of people injured, shattered lives, education, and economies with a huge increase in suicides but to the WEF it’s “quietly improving cities around the world.” That’s sociopathic. They relish the ability to study earthquakes. But you study earthquakes primarily to save the people from them. You don’t celebrate doing in the people to study the earthquakes. Unless you’re demented and perverse. But hey, the “climate” will improve.

The WEF isn’t just some random fly-by-night radical organization, but one that really has influence over global leaders throughout the world. The forum has a famous yearly conference in Davos, Switzerland, with other meetings throughout the year where it “engages the foremost political, business, cultural and other leaders of society to shape global, regional and industry agendas.” They’re pushing the “Great Reset” to change the world’s economies because of the “opportunity” of the pandemic.

As we previously reported, “In short, we need a ‘Great Reset’ of capitalism,” Klaus Schwab, the founder and executive chairman of the World Economic Forum said. “All aspects of our societies and economies” must be “revamped,” he also wrote, “From education to social contracts and working conditions.” One of the main themes of their June meeting was the opportunity presented to change everything that the virus presented.

If you check here, you can see all the companies who are involved, who are their “partners.” If you check here you can see the folks involved in their January virtual meeting including the first person at the top of the pictures, China’s Xi Jinping, Germany’s Angela Merkel, Russia’s Vladimir Putin and a host of other world leaders including the Secretary General of the U.N. and the president of the International Monetary Fund. Oh, interestingly, the head of the WHO, Tedros Adhanom Ghebreyesus, the folks who didn’t tell the truth about the transmissibility of the virus back in January.

These are the folks influencing and trying to control our world. We are in deep trouble.

Stacey Abrams Is Running For Governor

Appeal Of Dismissal Filed In Fulton...

A Savannah Historian And Pilgrim Descendant...